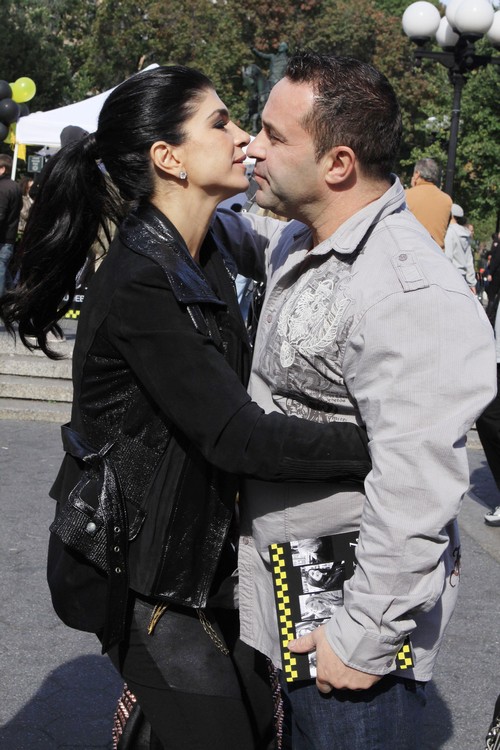 It has been a few months since there has been a story about chronic bad boy, Joe Giudice stepping out on his wannabe Jersey princess wife, Teresa Giudice, so I guess we’re overdue. Juicy Joe, as he likes to be called, seems to have this deluded notion that he’s every woman’s dream guy and if that isn’t funny enough, Teresa seems to think the same. Somehow he does manage to snag much younger women to toy with and the latest instance came just a few weeks ago.

According to the May 13th print edition of Star Magazine Joe was spotted out at the Hurricane Club in NYC on April 22nd with a tiny, hot brunette. Before he insists it was business (and maybe it WAS a certain type of business deal) let me tell you that after throwing back 3 vodka martini’s each she didn’t stop Joe from touching her thigh underneath the table in their semi-secluded booth!

Teresa has always taken a stand by her man approach when it comes to her husband, no matter how dirty of a dog he may appear to be. I have to wonder when the heck she’ll stop that because it just makes her look like the most foolish, gullible woman in Jersey.

The timing for this new development might actually be perfect. The Real Housewive’s of New Jersey is currently filming it’s latest season so I’m sure Joe’s secular activities will ensure that Teresa has something to lose her mind on camera about. Not that there’s going to be a draught on the dramatic front. Somehow all of these ladies are coming back together after last season’s Strippergate and that is a situation that will continue to play out when the new episodes begin airing in June.

Did Joe cheat on Teresa yet again? Don’t you wonder why a woman as savvy as her would think that she needs a guy like Joe on her arm? Tell us your thoughts in the comments below!