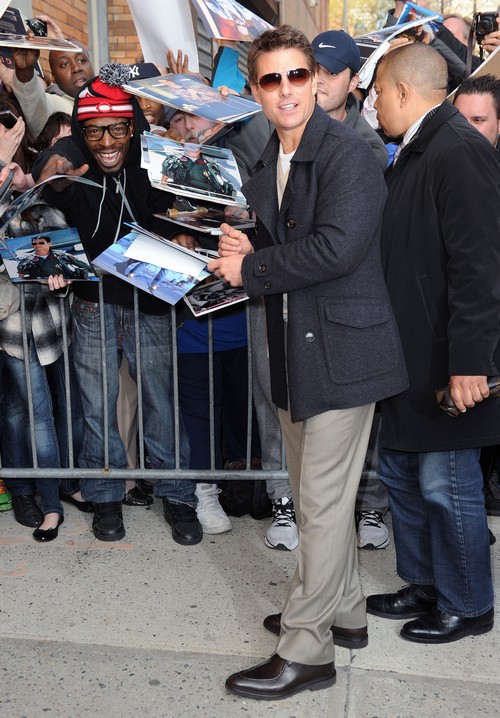 Height has always been a ridiculously serious issue for Tom Cruise. At only 5 foot 7 the star has been rumored to demand that his women stay away from heels and stick to flats.  Tom may have a huge ego and believe that his way is the right way, period but when it comes to standing tall he feels like he has been grossly unblessed in that department and he fully expects those around him to accommodate his issue.

According to the May 13th print edition of Star Tom recently saw pictures of him on the red carpet with Oblivion co star, Olga Kurylenko and thought he looked even shorter than usual. As it turns out he could be absolutely right!  Studies have shown that men over 40 can easily shrink a quarter of an inch each decade, meaning that Tom could indeed be at his shortest adult height to date. Since Tom is so obsessed with himself he would notice the slightest of changes and boy did he take it seriously. Tom has already contacted experts to learn about all of the preventative measures that he can take before resorting to surgery to help keep him as tall as possible!

I find all of this pretty funny and it shows how completely lost this guy really is. He has always believed that his height is the biggest problem in terms of women and getting good career roles. In other words, many of his more recent flicks have been mediocre because he’s not tall enough and all three of his wives have hit the bricks because he’s short! It’s certainly not the fact that his every move is governed by Scientology and that he is a total control freak. In Tom’s mind these things don’t have a serious affect on why people run from him and projects often fall flat. Do you think Tom will ever decide to stop obsessing over his height and start to look at his real issues? Tell us your thoughts in the comments below!