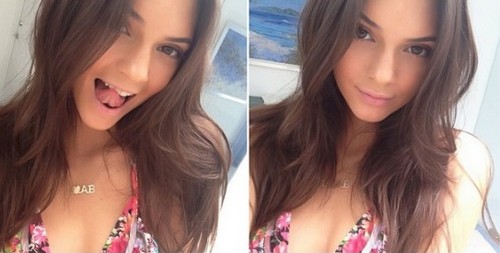 17-year-old Kendall Jenner appears to be following in big sister Kim Kardashian’s footsteps.  Kim’s claim to fame is her sex tape and now Kendall think it is appropriate to post provocative pictures of herself for the work to see.  Kendall posted the photo above to her twitter account with the messages, “2 little #selfies.”

Kendall is currently working as a model and it looks like she is growing up fast.  Kendall’s Mom Kris Jenner has been criticized for using Kendall and her sister Kylie Jenner to make money.  Don’t forget Kris is manager to her children and makes 10% of every penny they earn.

What do you think Hiccupers, is Kendall growing up too fast?  Hit the comments and let us know your thoughts!