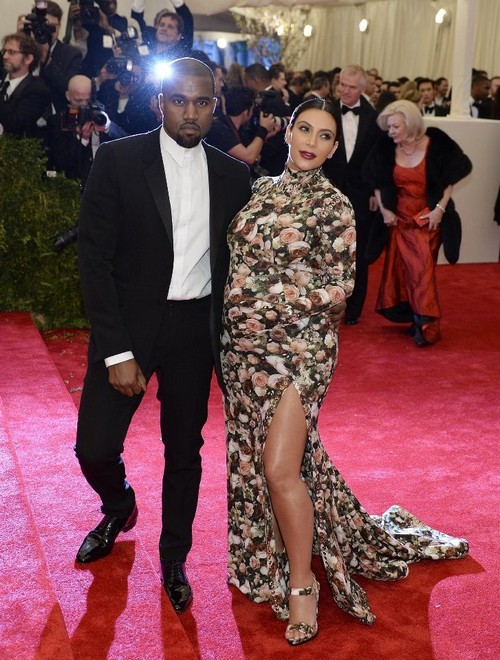 The Met Gala is one of the biggest fashion events in NYC and this was the big year for Kim Kardashian. Up until now the reality television star has never been allowed through the front door of the prestigious event, but this year Kim was invited because she is dating Kanye West- who just so happens to be performing.

It’s already painfully obvious that Kim has packed on a ton of weight and has had a serious problem making peace with the fact that she’s pregnant and should dress the part. Instead she has packed herself into ridiculous get ups that are making her look ridiculous, not sexy. Tonight’s ball gown was designed by Kanye’s best friend, Riccardo Tisci and had to be altered five different times in order to pack Kim into it. Finally the once stylish Givenchy frock was retooled until Kim finally appeared on the red carpet looking like she was wearing a Gunne Sax dress, circa 1988.

According to Life & Style Kanye is pissed that his friends work was ruined by Kim’s latest stylist. Says a source for the magazine,

“She had the Givenchy severely altered at the last minute on orders of her new stylist. She’s gained a lot of weight in her arms and her stylist has told her she should not show them off,” the insider says. “So her dress now has sleeves when it was sleeveless before. Kanye is annoyed, as the dress is by his best friend Riccardo Tisci at Givenchy, and he feels embarrassed that Kim is messing with a beautiful piece of art.”

Kanye isn’t very good at hiding his feelings and inj nearly every photo that I’ve seen, his body language tells the story of a man trying to get as far away from his baby mama as possible. What do you think of Kim’s dress? Are you digging it or does your grandmother have a matching couch just like it? Tell us in the comments below!

Head over to our friends at Have U Heard to see the rest of the Red Carpet Arrival Fashions at the Met Costume Ball, CLICK HERE …