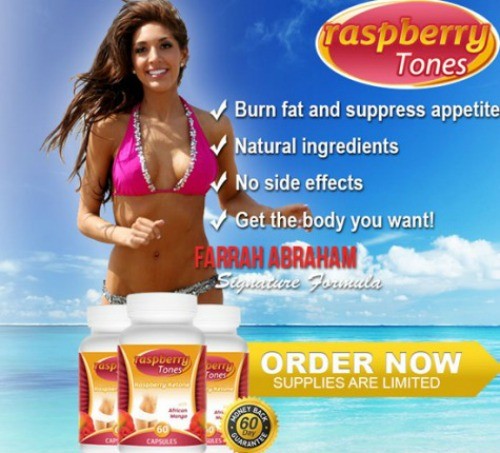 She has already scored close to what was said to be a million dollars for her involvement in the Backdoor Teen Mom movie and now we’ve heard that she has earned herself another six figure deal for this nonsense. Will it ever end? TMZ reports:

The Backdoor Teen Mom has signed on to endorse a product called Raspberry Tones … which bills itself as a “diet and fat-loss” pill. We’re told it wasn’t the sex tape that caught the company’s eye (ok, maybe a little) but rather the bikini pics of Farrah that surfaced last month.

According to our sources, Farrah loved the idea of endorsing a health product and couldn’t pass up the payday … which, we’re told, is somewhere in the low six figures.

A rep for the company tells TMZ, “Farrah represents a growing audience of young, active people who take care of their health and use only natural products to look and feel great. Farrah looks fit and fabulous, and takes care of her body, and a lot of health-conscious people can look up to that.”

It is completely obvious that the only exercise this girl is getting is by laying on her back. Why anyone would think she would be a good spokesperson for their brand is beyond us. What do you think?