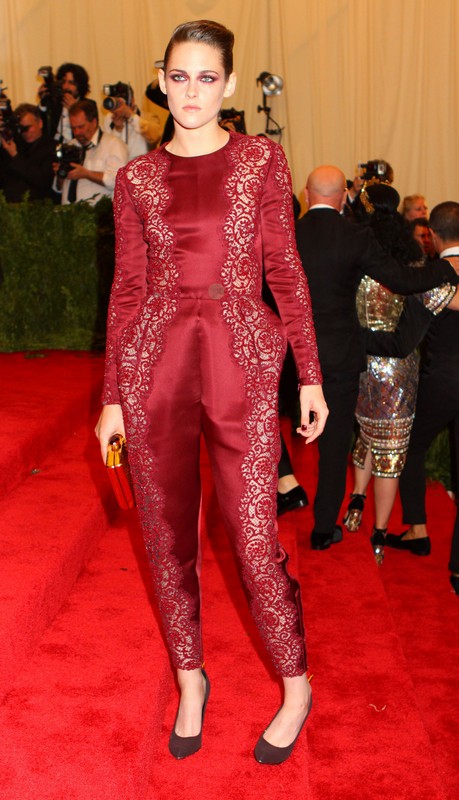 Is their trouble in paradise?  Kristen Stewart attended the 2013 MET Gala in New York City on May 6 and reportedly asked boyfriend, Robert Pattinson, to join her on the red carpet at the star-studded event. Kristen and Rob always have fun in the city together and Kristen had hoped that they could spend time with good friends as well.

Interestingly Pattinson has been spotted in New York City several times last week. The British hunk was seen attending a Daughter concert in Manhattan’s on April 30 with pal Katy Perry.  Then he was spotted several days later having dinner with a “mysterious blonde” at Gemma restaurant in Manhattan’s East Village area on May 3.

A source said: “She would love for Rob to be her date at Monday’s Met Ball, but she isn’t pressuring him.” Kristen loves fashion and loves Rob but the couple who are thought to have had a rocky year as far as their relationship is concerned, have not been seen on the red carpet together for quite some time.  The MET Gala was no different as Kristen ended up walking the red carpet solo at the major fashion event. Where was Rob? Why was Rob not at the event? Kristen is Rob really your “BOYFRIEND”! When the love of your life does not join you for a major event when he is in New York, than one must wonder are the two of you really back together.

No word on whether or not Rob did not want to go or had a scheduling conflict but regardless he knows Kristen was very disappointed not to have him by her side. K-Stew I know you would have loved for your man to join you but he didn’t so think of the positive side as you looked gorgeous in your Stella McCartney number. Kristen sorry but it does not look like Rob wants to spend time with you prior to starting his next project and instead he is occupying his time with blondes and brunettes.

Is anyone surprised that Pattinson did not attend the MET Gala with Stewart? How much longer will this pathetic attempt to rekindle love last? Share your thought with us?