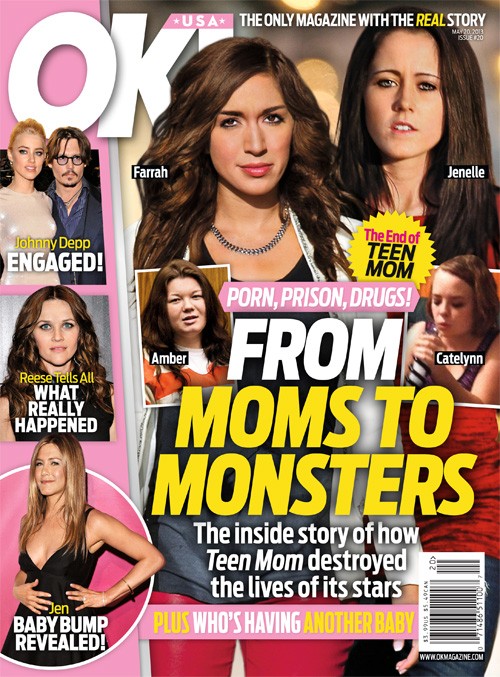 Amber Portwood, 22, was arrested for violating her drug court probation by failing a urine test and then lying about it. Portwood is serving time in an Indiana prison for the next two years or more.

Farrah Abraham faced her DUI from March 2013 and at the time of arrest, the TV mom blood alcohol level was a .147, double the legal limit and she was charged with aggravated DUI, refusal to take a field test, and disorderly conduct. If this was not enough MTV’s Teen Mom star Farrah Abraham has found a buyer for her adult film: Vivid Entertainment. Amazingly this news was leaked the same day that her lawyer went to court to enter a not guilty plea in for those charges resulting from the DUI arrest in Nebraska.

Did Teen Mom destroy these scarlet’s lives or were they not wrapped to tight already. If anything, aren’t the wannabe stars getting paid, and thus supporting their kids! What is the price of fame and were these ladies and their families willing to do anything for the almighty dollar. Being addicted to attention is why we now have MOMS that have become MONSTERS and longing for more than 15 minutes of fame.

Did Reality destroy the lives of the Teen Moms or did the ladies themselves create a dysfunctional lifestyle for them and their kid? The reality TV show only perpetrated issues we did not see and producers only brought them to life on the big stage offering a huge payday. There is the price for fame and Teen Mom’s now knows the price! Maybe it sends the wrong message to viewers, but for these girls specifically, they continued to sign up for the money. Were they “bribed” to be on the show? Let us know your thoughts.