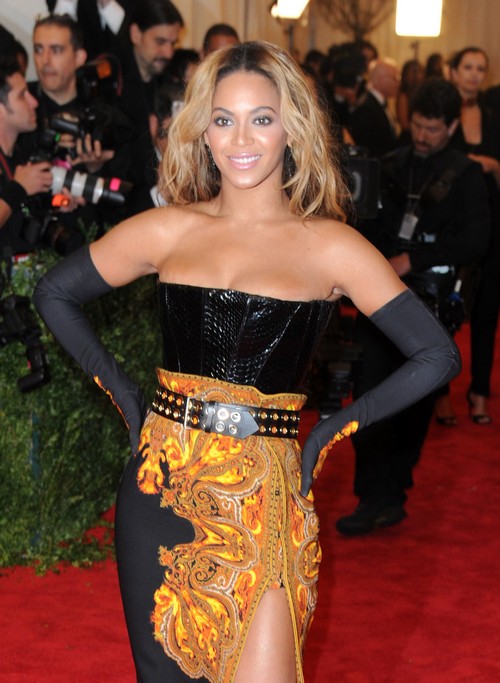 Hmmm it looks like Mrs. Carter might have a pretty big secret and those who have seen her most recent tour dates are starting to speculate that Beyonce may indeed be pregnant. She first raised eyebrows at The Met Ball last weekend. It’s a yearly event that lends itself to uncomfortable gowns and itty bitty, corseted waistlines so if you show up looking even a little puffy or bloated the masses will talk. The comments began after that appearance and Jay-Z’s wife isn’t exactly doing anything to quiet the rumors. In fact she sat for an interview last week on Good Morning America and admitted that more children are in the near future because Blue Ivy could use a playmate or two.

Beyonce is a pro at shuffling her priorities around so this might be exactly the right time for another baby. Think about it- she whipped herself back into amazing shape and has made guys drool in new photo shoots, dropped a new album and is touring to promote it. Then there was that bucket list thing called The Super Bowl. It was a gig that she had always dreamed of landing and Beyonce swears she trained for it like an athlete. In other words, she has accomplished a ton since having her daughter. The professional side of life has to look and feel pretty amazing. Now it’s time for Beyonce to balance the scales a bit and focus on expanding her family!

If she is pregnant (and I’m leaning towards the notion that she is) how do you think that Beyonce will announce this one? The world learned of Blue Ivy’s existence at the end of a performance at the MTV Awards in 2011. How on earth will Beyonce chase that?  Do you think she’s pregnant again? Tell us your thoughts in the comments below!