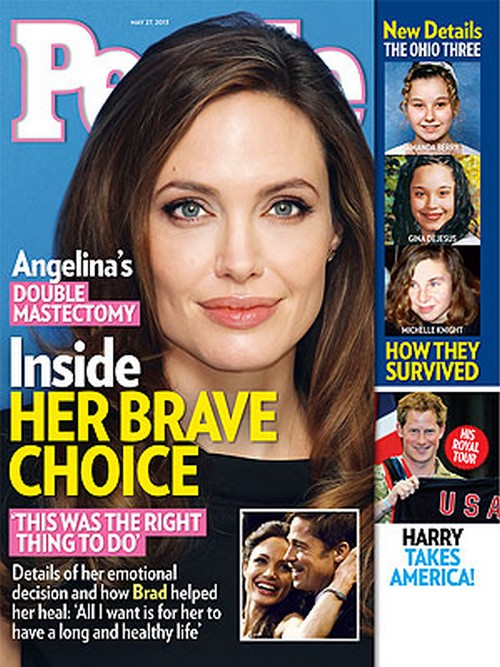 The current issue of People Magazine features the cover story, “Angelina Jolie’s Double Mastectomy – Inside Her Brave Choice.”  Angelina Jolie announced to the world yesterday that she had chose to have a double mastectomy and reconstructive surgery because of her “faulty” BRCA1 gene.

This week People has all the details of her emotional decision and how her partner Brad Pitt helped her heal.  Brad said, “All I want is for her to have a long and healthy life.”

But this was only the first decision Angelina had to make.  She still has to face that because of the “faulty” gene she is also at a 50% risk to get ovarian cancer.  Angelina’s lost her mother, Marcheline Bertrand to ovarian cancer at the age of 56.  The magazine is reporting that Angelina has also decided to have her ovaries removed.

Right now Angelina and Jolie are just trying to make home life as normal as they can for their six children.  Adds a family insider: “Her kids always come first to her.”

To find out more details of Angelina’s brave choice, pick up the current issue of People Magazine on stands Friday.