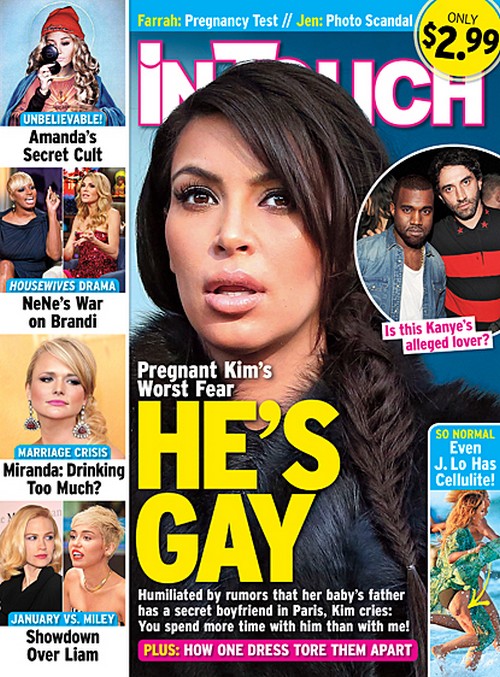 The current issue of In Touch features the cover story “Pregnant Kim Kardashian’s Worst Fear – He’s Gay.”  Sometimes when I look at magazine covers I go huh?  Other times they are boring, but this morning the In Touch cover had me laughing my head off, so thank you In Touch.   It seems Kim Kardashian cannot imagine any man wouldn’t want to be at her beck and call.  Poor Kimmie has been trying to puzzle out why Kanye West has been shunning her like the plague, she has finally come up with an acceptable reason.  Or at least one that makes sense in her head, Kanye is GAY!

Now that you have calmed down from your laughing bout, it seems Kim, gasp, is humiliated about rumors her baby father, Kanye has a boyfriend in Paris.  The two allegedly had a knock down, drag out fight where she accused, “You spend more time with him, than me!”

Worse still the man in question is none other than the designer, Riccardo Tisci, of her disasters flowery Givenchy gown she wore to the Met Gala.  Kim’s gown choice was ripped apart by people everywhere as a fashion disaster and a joke.

According to In Touch, “Kim’s freaking out,” says a friend. “If it turns out Kanye is involved with Riccardo, she will be utterly embarrassed – more so than she’s ever been in her life.”

So what do you think Hiccups is the reason Kanye ignoring Kim because he loves another man or is it because he realized what a big mistake he made?  Hit the comments and let us know your thoughts!