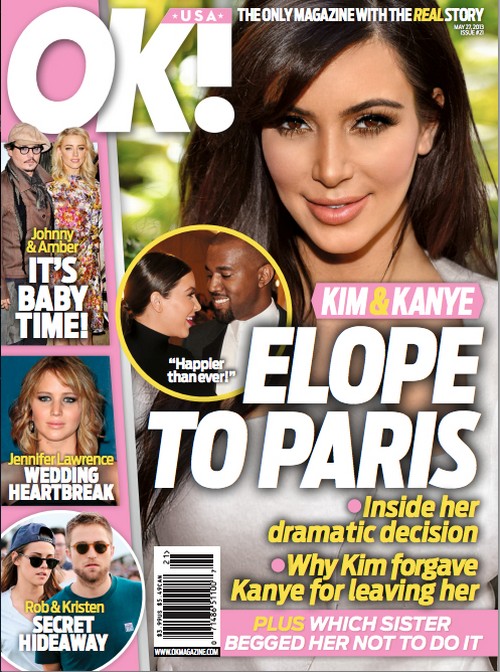 Despite the rumors going around that Kanye West is gay, we’ve learned via OK! magazine that he and Kim Kardashian are actually eloping in Paris. Can the tabloids finally make up their minds already?

There have been reports floating around that Kanye has been treating Kim like she’s the help. Perhaps they are planning to get away to Paris and get married in secret? It might just work, considering that they have stricter privacy laws over there. You see, that way Kanye wouldn’t have to worry about running into any signs because he’s not looking where he’s going. Ha.

The tabloid offers to give insights into Kim’s dramatic decision, why Kim forgave Kanye for leaving her and the most important story, which of her sisters begged her not to do it! Do you think Khloe stepped up and said screw that? Or was it Kourtney, who refuses to marry Scott?

Head over to Twana Tells to find out about Kanye’s latest rant at the paparazzi and what he said about his head bumping incident, CLICK HERE….

Let us know your thoughts in the comments!