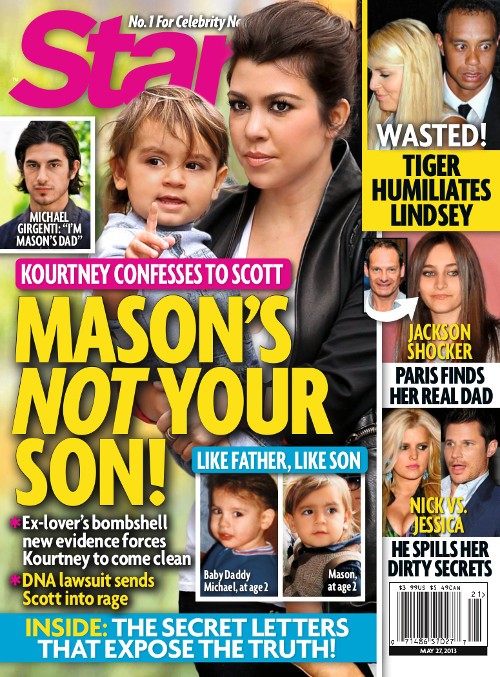 Kourtney Kardashian is featured on the latest cover of Star magazine. According to the magazine, she is revealing that her son, Mason’s father is NOT her long-time boyfriend Scott Disick. Slow news day for Star, perhaps?

Again, a guy who said he hooked up with Kourtney named Michael Girgenti is claiming that he actually fathered Mason. “Looking at my baby photos and then seeing Mason just breaks my heart.  To see that he looks like me and could be mine — but not being permitted to know the truth pains me.”

Kourtney has already previously denied the reports of anything other than a professional relationship with this guy, but still he persists. Could it be because 15 minutes after we learned his name, we didn’t know who he was?

The tabloid reports that his new bombshell evidence that forced Kourtney to come clean. The lawsuit over the DNA test has also sent Scott into a rage. Uh huh. If any of this were true, we imagine he would be miffed.

Also featured in this issue of the magazine, Tiger Woods has humiliated his new girlfriend Lindsey Vonn. In addition to that, the magazine has uncovered Paris Jackson’s real biological father. Lastly, the tabloid gives the dirt on Nick Lachey exposing Jessica Simpson’s dirty secrets.