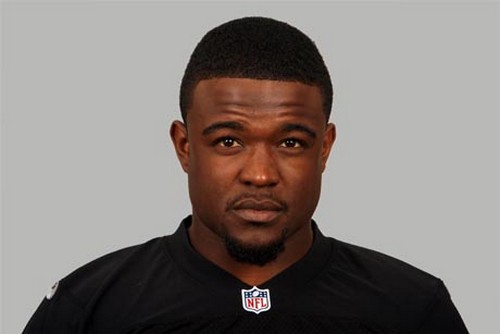 American football running back for the New York Jets of the NFL, Michael Goodson has been arrested.  Michael was found to be in possession of weed and a loaded handgun.  Michael just signed with the Jets in March 2013 previous to that he played for the Oakland Raiders.

TMZ has the scoop on the story, “According to cops, Goodson — who was signed by the Jets during the off-season to compete for the starting RB job — was a passenger in an SUV that was parked along Route 80 in Denville, NJ. Cops say both Goodson and the driver of the vehicle appeared WASTED when they approached the vehicle.  During the encounter, cops say Goodson was found to be in possession of weed (less than 50 grams) — PLUS a loaded .45 caliber and hollow-point bullets.

Why Michael would need a gun with hollow-point bullets is a mystery.  Those type of bullets are made to cause the most possible damage. “they are intended to cause the bullet to expand upon entering a target in order to decrease penetration and disrupt more tissue as it travels through the target.”

The bullets are banned in New Jersey and in some other states.  Michael was taken to the hospital and one he was released he was taken into custody by the New Jersey police.

What is wrong with him, he has a great job… so many young athletes would give up everything to play for the Jets and he screws up.  These idiot athletes think they are untouchable.