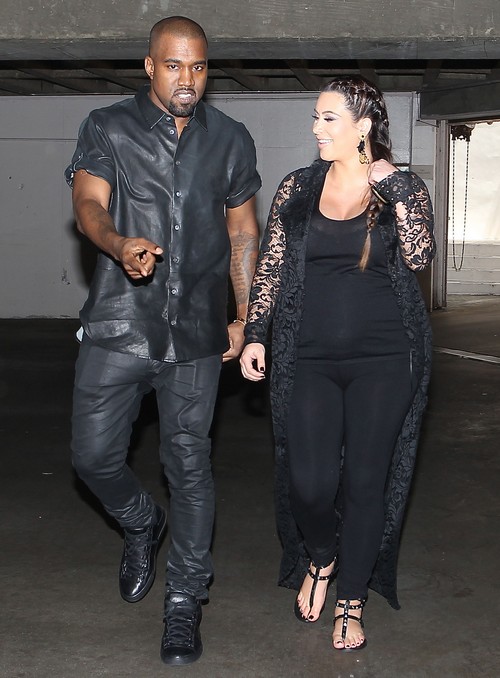 Kim Kardashian got her wish these past few weeks- Kanye West has come home to spend some time with her! As you already know, Kanye has decided to spend the majority of Kim’s pregnancy in Paris as far away as possible from his baby mama’s bad fashion choices and annoying family. He had to come back eventually though and it seems like from the moment he stepped off the plane Kim has been clinging to her moody man.

According to the May 27th print edition of In Touch, Kanye is tired of dealing with whiny Kim and stopping home has been more like an obligation than something he wants to do. The couple showed up at the Met Ball and caused a commotion. Kim had her stylist hack a dress crafted for her by Kanye’s rumored boyfriend on the side and that led to the rapper unleashing his usual fury on everyone around him.

The couple also was out and about in Beverly Hills and when Kanye walked head first into a street sign he unleashed like crazy on the photographers nearby. After joining Kim inside the restaurant she didn’t fare any better because Kanye blamed her for not warning him about the sign.

It seems like the worse Kanye treats her, the more inclined Kim is to cling to him for dear life. Let me tell you, the dude hates it. He wanted to date his “perfect bitch” that looked good on his arm. He never signed on for the baby mama drama or Kim packing on necessary pounds. No matter how tight she hangs on it’s only a matter of time before Kanye is out of there for good, don’t you think? Tell us in the comments below!