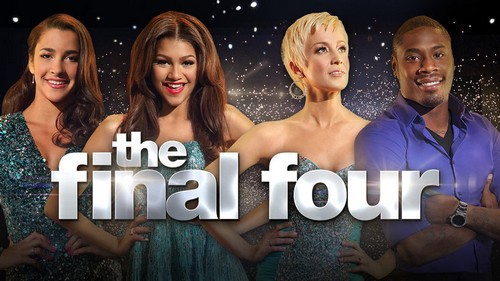 Tonight on ABC Dancing With The Stars returned with the final performance show of the season.  The Remaining four couples will have one last chance to impress the judges with their dancing skills – in hopes of being crowned the next DWTS champion.

On tonight’s show the remaining couples will compete in three rounds of dance. In the first round, each couple will take on a new routine in a dance style that the judges would like to see again. In round two, the couples will be challenged to a Cha Cha relay, where each pair dances to a different section of the same song. In the last round — and one of the biggest competitive dances of the season — the couples take on a supersized freestyle featuring special effects, additional dancers and unexpected surprises.

The dance assignments for the finale are 1) Judges Choice Dance 2) Cha Cha Relay and 3) Freestyle.  The judges choice for the dancers are:  Zendaya and Val – Samba; Kellie and Derek – Quickstep;  Jacoby and Karina – Jive and Aly and Mark – Samba.

On Tuesday, the entire celebrity cast returns and the returning stars will perform a show-stopping opening number with the pro and troupe dancers. The show will feature music from Pitbull, who will perform his new single, “Hands Up,” and Wynonna will sing “I Want to Know What Love Is.” In addition, PSY will take to the stage with his latest hit, “Gentleman,” and Jessica Sanchez will sing her version of Pitbull’s “Feel This Moment.”