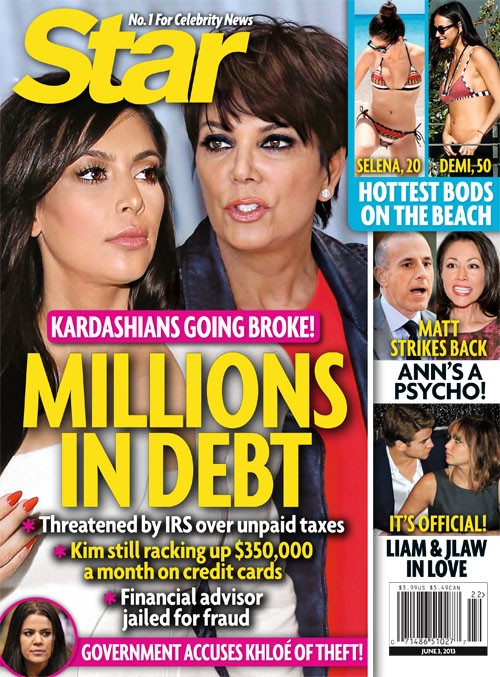 Is it possible that Kim Kardashian and her troll family are going broke? It’s not likely, in our opinions, but it is conceivable.

As long as these broads still have younger girls in the family to pimp out and make money off of, we’re guessing that it’s not likely that they will be having financial trouble any time soon. Pimp mama Kris Jenner still has girls of whom she can film having sex with D-list rappers, so there’s always money to be made, no?

Still, we can’t help but to laugh at Star magazine’s latest cover. The Kardashians are going broke and they are millions in debt. All Kim has to do is shove a camera into her uterus for the money shot and all of their financial problems will be solved.

According to the magazine, it appears that these famewhoring twits are being threatened by the IRS. It all boils down to Kim’s apparent crazy spending problems. She chalks up a bill of $350,000 per month just on her credit cards alone. That’s more than a lot of people will see in five years’ time and she wastes that every month! We’re glad we’re not her financial advisor!

If the rumors of them going broke are true, can we expect another sex tape in the works? Which one of the girls will be forced to film it this time?