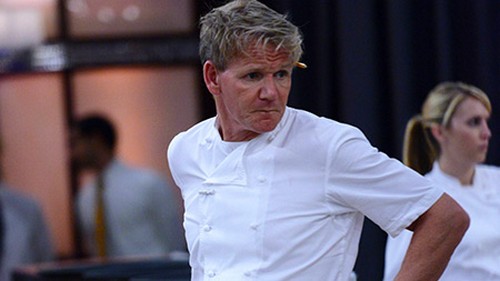 Hell’s Kitchen returns to FOX tonight with a new episode called, “8 Chef’s Compete.”  On last week’s show in the continuation of a dramatic elimination round, Chef Ramsay made an announcement that changed the competition for good. Later, Chef Ramsay announced that HELL’S KITCHEN would be hosting a very intimate dinner for distinguished members of the United States Army. Then, in another dinner service – one team faltered and found itself in a confrontational elimination round.  By the end of service the blue team lost and Michael was sent home.  Did you watch last week’s episode? We did and we recapped it here for you!

On tonight’s show the remaining eight chefs take a spin to determine which type of international cuisine they will cook in a challenge that will test their ability to create an exquisite ethnic dish using only select ingredients. The winning team earns a shopping spree and private lunch, while the losing team must restock wine and prep the bar for dinner service. Later, one team falls behind even before dinner service begins, and the other team’s strongest competitor makes shocking mistakes that put Chef Ramsay over the edge, forcing him to send both teams out of the kitchen. After the worst dinner service in HELL’S KITCHEN history, each team must nominate their weakest chef in another explosive elimination round.

Tonight’s episode are going to be another drama packed ones, which you won’t want to miss. So be sure to tune in for our live coverage of FOX’s Hell Kitchen Season 11 “8 Chef’s compete” — tonight at 8PM EST!