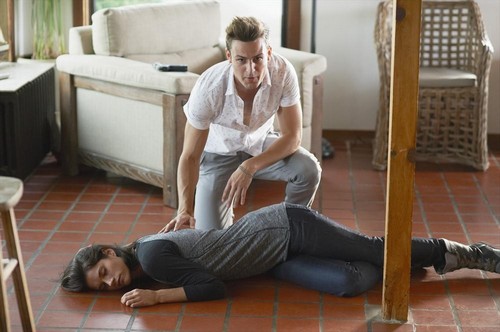 Rookie Blue is back tonight with its season 4 premiere.  On the season finale last season when a violent child abductor escaped from an emergency hospital visit, the officers of 15 Division tried to track him down before he took another young victim. When Andy and Dov discovered that the desperate man had snatched another girl, Andy and Swarek found themselves in a deadly standoff to save the terrified victim, resulting in a major emotional confrontation — and a serious choice for Andy.  Meanwhile, Chris’ family obligations had him contemplating a transfer, and Traci and Gail each faced monumental decisions regarding their respective careers.  If you missed the season finale you can read our full and detailed recap here, to catch up!

On tonight’s show Andy and Nick continue to work undercover infiltrating a meth pipeline. However their covert mission goes sideways when Nick – then Andy – go missing. Meanwhile, a random arrest at 15 Division puts Sam Swarek and the other officers in the middle of the drug investigation-turned-rescue operation. Finally, Andy must figure out how to cope with the transformation of her own life as well as those of her friends at the station and continue to do the job she loves.

Tonight’s episode is going to be an exciting one that you won’t want to miss, so be sure to tune in for our live coverage ABC’s Rookie Blue tonight at 10 PM EST! While you wait for our recap hit the comments and let us know how excited you are about the premiere of season 4 of Rookie Blue! While you wait for the recap, you can checkout a sneak peek video of tonight’s episode tonight below!