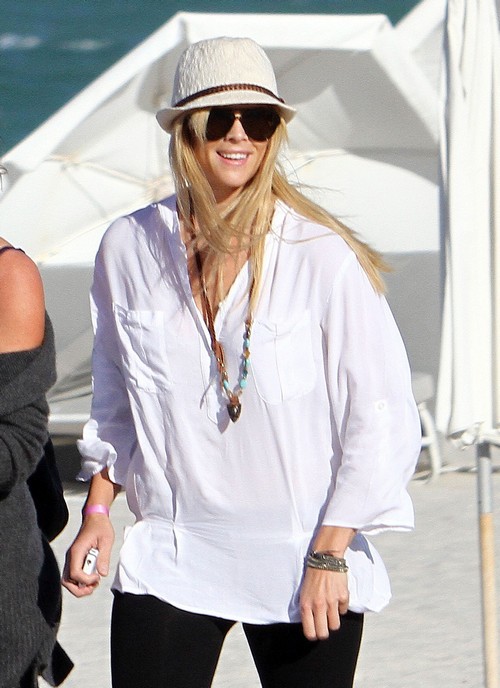 It looks like Tiger Woods is really starting to walk a fine line regarding his kids and his ex, Elin Nordegren is about to drag him back to court for it. When the couple divorced back in 2010 their divorce agreement clearly stated that the kids were to be kept away from romantic partners and were never to be exploited for publicity. According to the June 3rd print edition of National Enquirer, Elin feels that Tiger’s recent actions have clearly violated that agreement. He was recently photographed yachting in Jupiter, Florida with girlfriend, Lindsey Vonn and his two kids.

According to Elin, Tiger knew that boating in that area was a photo op for them to look like a family and that the press would jump at the chance to photograph them. Tiger and Lindsey were then caught on camera taking the kids to school on May 20th and Elin flipped. She feels that Tiger is using the kids to try and repair his tarnished public image by looking like a stable, happy family with his new girlfriend. If you’ve kept tabs on the Tiger and Lindsey saga then you already know that there are clearly problems there. Lindsey doesn’t trust Tiger because she constantly catches him oogling other women while out together.

It’s no wonder Elin flipped out, she probably sees this love affair as temporary and doesn’t want her kids involved.  She has her attorney’s looking into whether or not there is enough to file an injunction against Tiger. It’s a complete violation of their divorce agreement and his behavior could easily bring the whole divorce case back into court again.

Do you blame Elin for wanting to protect her kids from what is likely a temporary situation between Tiger and Lindsey? Tell us your thoughts in the comments below!