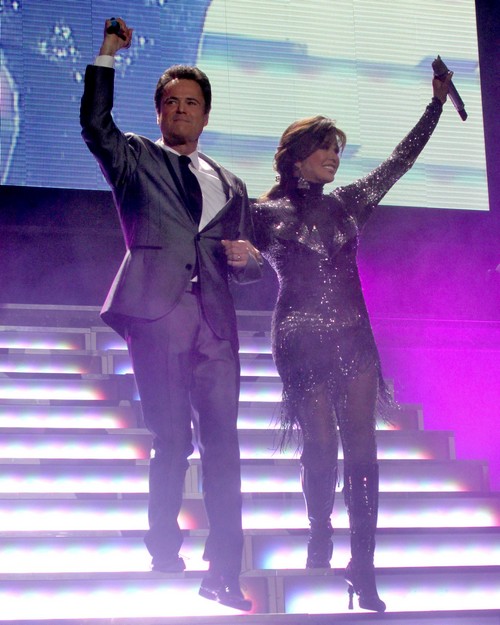 Here’s a shocker- Marie Osmond and Donny Osmond aren’t exactly as tight as we thought. They’ve been doing a 90 minutes stage show at Flamingo in Las Vegas since 2008 and Marie is counting down til it ends.  The show itself has gone great and while onstage the brother and sister seem to get along just great, but off stage it’s a whole different story. Marie has always enjoyed a successful solo career while her brother has floundered to try and find his groove.

According to the June 3rd print edition of National Enquirer, Donny is trying to piece together a new talk show and the pressure of watching his sister find mountains of success is starting to take a toll on both of them. He has become difficult to deal with and Marie has, until now, held on and continued to work with Donny because the money is great and she knows he want earn as much on his own. Marie’s patience is pretty much gone now though and she is counting the days until their current contract ends so that she can do her own thing.

Unlike Donny, Marie’s solo career has thrived. She’s a successful talk show host, author and a great pitch woman. She has no concern about earning a living and is anxious to step away from all of the stress that comes from working with her brother.