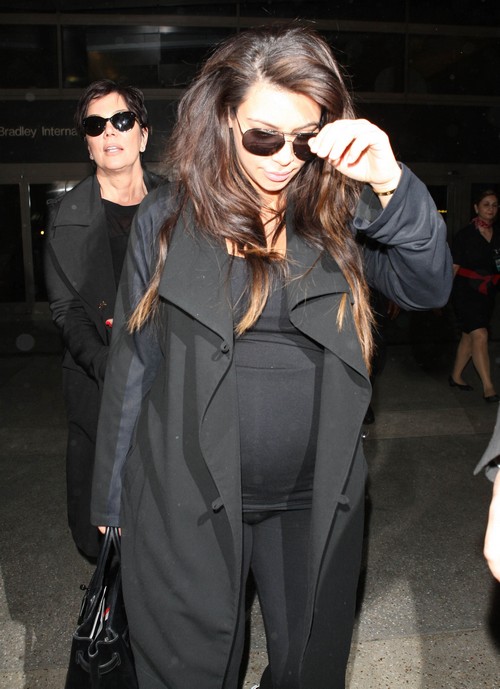 Well, this comes as no shock to me whatsoever. While most mother’s want to spend their very first week of motherhood bonding with their new baby, Kim Kardashian has already hired an expensive photographer to document her every moment from her delivery right through her first week with her new baby.  According to the June 3rd print edition of National Enquirer Kim has made numerous over the top plans for her hospital stay. She wants her birthing suite stocked with white roses, has her favorite LA eateries already on speed dial and plans to deliver in French lingerie rather than a hospital gown!

I have to wonder what Kanye West is saying about all of this. The notoriously private rapper has already laid down the law with Kim, demanding that she keep their child as far from the spotlight as possible. How do you think the hothead will react when he realizes she intends to exploit the baby right from the get-go?

I also suspect that if Kim wants to be followed by cameras then there is likely already an E! Special in the works. There’s no way that momager Kris Jenner is going to allow this occasion to happen without profiting from it, don’t you think?  I think the clashes that we have seen between Kanye and Kim regarding their different lifestyles are absolutely nothing compared are nothing compared to what is inevitably coming in the not so distant future!

I see Kanye going after custody once Kim starts to exploit the baby for cash, television opportunities and photo ops. This baby can easily be used as a meal ticket for Kimmie and I don’t think that she’ll see anything wrong with doing it either, do you? Tell us your thoughts in the comments below!