Kim Kardashian Wants to Be Sexy While Pregnant 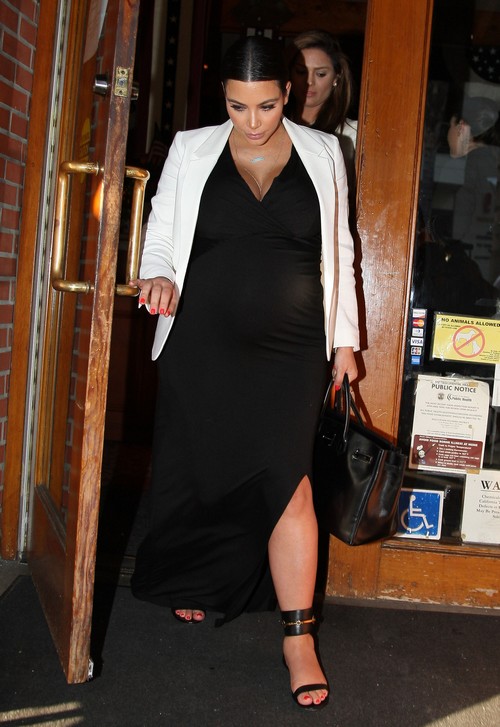 I’m telling you right now, Kim Kardashian is going to look back on photos of her pregnancy and wonder what the heck she was thinking. We already know that the reality star has had an extremely hard time adjusting to the changes within her body while carry her baby  because she vents about it every chance she gets. She’s the only pregnant woman that almost makes you forget she’s going to be a mother because she’s so busy obsessing over her appearance.

According to the June 3rd print edition of In Touch, Kim is cramming her sausage feet into 5 inch heels because she thinks Kanye West believes it keeps her sexy. She is supposedly focused on clothes that will make him think she’s the hottest chick around. Apparently someone needs to clue Kimmie in that it’s not working. Kanye isn’t proudly by her side, instead he’s usually in another country. The way she’s carrying herself has done nothing but chase her baby daddy as far away as possible.

I have to wonder, if Kim just kind of went with it and wore comfortable clothes a’ la Kourtney Kardashian, if Kanye would be around. He supposedly can’t stand her and her obsessing over her looks has pissed him off because he actually is more focused on the fact that they’re having a baby than she is. You just know that Kim hasn’t bonded with the baby she’s carrying when she’s so focused on how it has temporarily ruined her body.

Do you think that there’s any chance that Kim will choose to spend her last several weeks a bit more comfortable? Will she give up the stilletos and leather and take care of herself a bit more? Tell us your thoughts in the comments below!