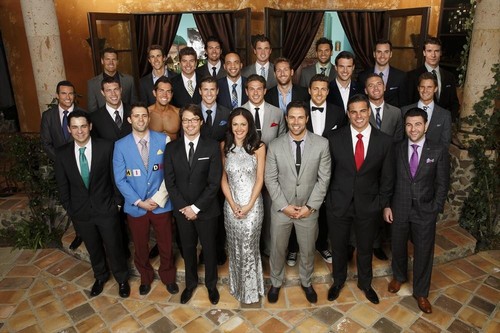 The Bachelorette returns to ABC tonight with a whole new series and they are billing this season as the Cinderella Story.  The new Bachelorette is Desiree Hartsock who was rejected by Sean Lowe.  Desiree is getting another chance this season to find the man of her dreams.

On tonight’s season premiere Desiree begins her Cinderella journey when Chris Harrison welcomes her to her new home, a cliffside Malibu estate, and gives her the keys to a brand new Bentley convertible. Her transformation is complete as she slips into a stunning silvery confection of a gown fit for a princess. At the mansion, Desiree’s anxiety falls away as her 25 eager suitors catch their first glimpse of her:

One nervous guy tries to sweep her off her feet with a romantic dance move, but falls flat; a sleight-of-hand artist makes something special magically appear for Desiree; a hunky oil rig worker puts his amazing abs on display straight off; still another hopeful Prince Charming goes to the other extreme, showing up in a medieval suit of armor. But the one who steals her heart is the youngest bachelor ever to step out of a limo — a four-year-old boy who is followed by his proud, single dad.

Tonight, the 19 roses are brought out early, and with them the battle for Desiree’s heart begins. The magician announces he is going to make the Bachelorette disappear, setting off a frenzy of guys stealing Desiree away in hopes of getting a rose. Once the first rose is awarded to one lucky fellow, a battle erupts between the jealous guys who will stop at nothing to get her attention: one man dazzles her with hip hop dance steps; the shirtless abs bachelor strips down completely and jumps in the pool — but will this outrageous stunt get him a rose or a ticket home? Tensions mount as a dashing Venezuelan former soccer player tries to pull her outside to show her some dribbling moves and the other guys intervene. The fireworks really explode when one overzealous bachelor wants to show Desiree his own private “fantasy suite.” Her reaction shocks the house! By the end of one of the most exciting nights of her life, Desiree is hopeful that one of the remaining 19 men will indeed be her Prince Charming.