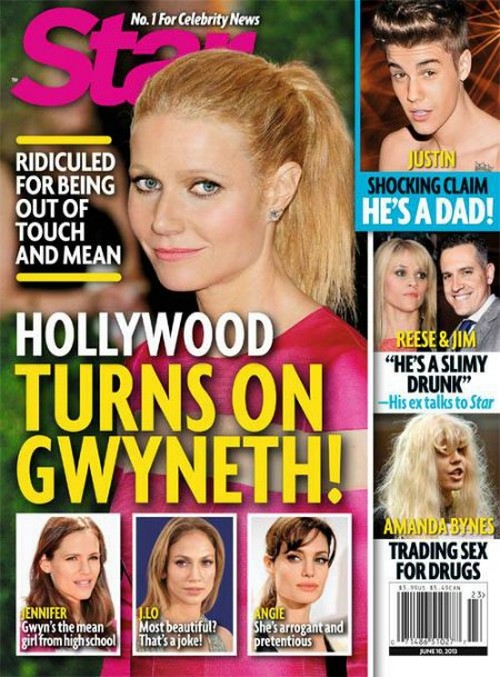 Gwyneth Paltrow is hated by Hollywood, screams the latest cover of Star magazine. If Hollywood really does hate Gwyneth, then we are right behind them.

She is such a snob that it’s no wonder that she could even exist in her own pretentious head. Gwyneth recently attended the Met Gala, but called it boring. She has also tried to push off her GOOP on the unsuspecting public. What that means, basically, is that you should follow Gwyneth’s advice in redoing your entire closet for a mere $20,000. So you know she is obviously catering to the rich elite folks who actually hate her guts. We love that. She’s preaching to her fellow celebrities and they’re all like, “Shut up, you suck!”

Jennifer Garner apparently thinks she’s the mean girl from high school, while Jennifer Lopez is scoffing at the “Most Beautiful” title that was bestowed upon Gwyneth. Lastly, Angelina Jolie has called Gwyneth “arrogant and pretentious”.

Can you blame any of them? Perhaps they are right and Gwyneth is all of those things? We already know that she is so out of touch with regular people that it’s not even funny. Most people don’t have the kind of money that she has and she just doesn’t see that. Paying $800 for an ashtray? Pretentious all the way!

What do you think of Gwyneth’s shenanigans? Does she need to shut her trap and be happy that she’s so lucky to have the life she lives? Hit the comments and let us know your thoughts!