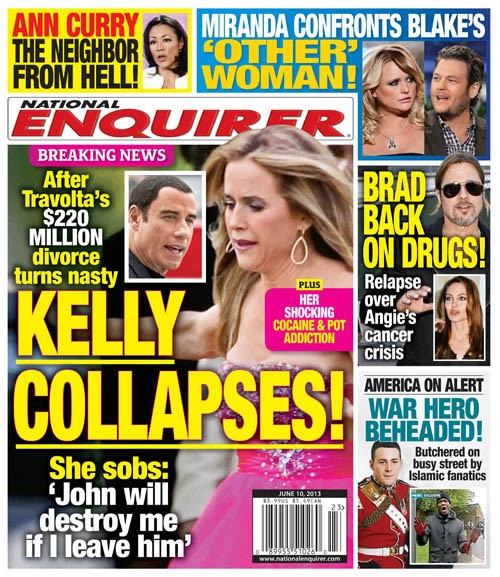 Is Kelly Preston abusing some kind of drugs in the face of her divorce scandal with John Travolta? According to the latest copy of the National Enquirer, Kelly has a shocking cocaine and pot addiction.

In addition, the magazine claims that she is worried that John will destroy her if she leaves him. The duo have faced many rumors on the topic of their faltering marriage, so this surprises absolutely no one.

We hate to see a good marriage go down the tubes, that’s why we could basically care less about their relationship. We’re of the mind that their marriage is based on lies and putting on a face just for the media. We can’t help but to think that there is some truth to the reports that he’s been cheating on her with men.Does anyone ever wonder why those guys who have reported inappropriate touching by John keep going away publicly? How much does John’s people have to throw in their general direction to get them to shut up? We’re going to guess hundreds of thousands of dollars….

We just don’t know why John doesn’t come right out and admit that he likes men. There isn’t anything wrong with it. It’s 2013, not 1980. Kelly could probably use some rehab if they’re being honest, too.