Kim Kardashian WON’T Give Up Plastic Surgery Despite Being Pregnant 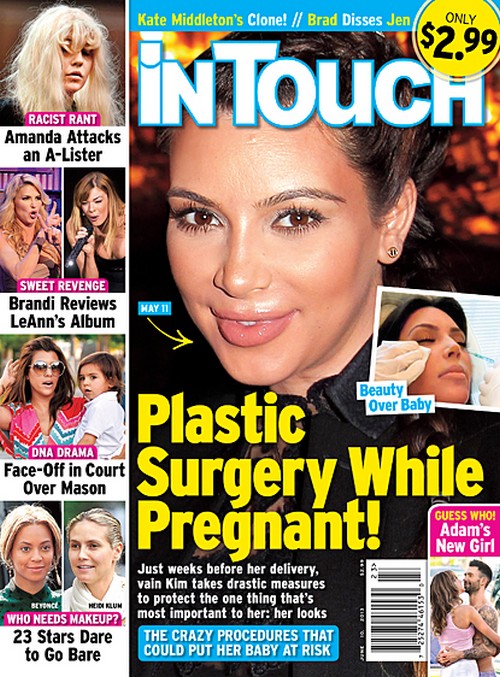 I think Kim Kardashian is probably the most thankless pregnant woman ever. The last several months we’ve listened to her obsess over baby weight, her looks, her size, etc. Rather than dressing her bump accordingly she has often admitted that she dresses to hit her baby bump. She seems to forget that millions of women- her sister included- would give anything to be in her shoes (well not the stilettos with her sausage feet, other shoes) right now.

Kim hasn’t really done anything to put her baby first and if In Touch magazine is to be believed, she also hasn’t given up her reliance on plastic surgery either!  Supposedly Kimmie has continued to get lip injections and botox in spite of the fact that everything that she takes into her body can also go straight to the baby.

In most instances, if you told me this about a pregnant woman I’d think it was a mistake, but with Kim, I could totally see her justifying cosmetic procedures while pregnant. She is so obsessed with beauty and how she looks at every given moment that I just don’t see her sacrificing anything even now. The funny thing is that for being so obsessed you’d think that she would at least look good an instead her choices have been horrendous! I’m telling you, she’s going to look back at her well documented pregnancy and cringe at the photos. Who the heck has a custom made leather skirt when they are 5 months pregnant?! It’s a shame Kim didn’t adopt her sisters’ pregnancy style, isn’t it?

Do you think Kim has continued her normal cosmetic procedure routine? Tell us your thoughts in the comments below!