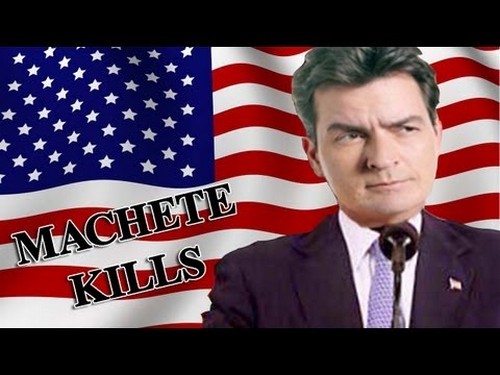 I think Charlie Sheen is one of those celebs that most of us have some sort of opinion on. Either you love him, you hate him or you’re mesmerized by him like you would be a burning building. Any way you look at it, he is a hot commodity and anything that he does is bound to garner some decent attention. Next up for Charlie is a film called Machete Kills  and the first trailer for it is now available on Yahoo.

The flick has Charlie cast as the most powerful man in the world, the president of the United States and I have to say I think Charlie could actually pull it off. At the very least I’m sure he can look the part.

The first trailer available also gives potential movie-goers a good glimpse of other vital characters, such as Lady GaGa’s portrayal of La Chameleon and Sofia Vergara as Madame Desdemona. Always a scene stealer, Sofia apparently has the ability to bring down an entire building by using her machine gun bra!

Machete Kills is directed by the noteworthy Robert Rodriguez who is known for having a hand in some of the most quirky action movies ever to hit theaters.  This one follows ex-Federal agent Machete, who is recruited by the President of the United States for a mission. The task is impossible for just any old man as he is tapped to take down a madman revolutionary and an eccentric billionaire arms dealer named Luther Voz. This mastermind has a plan to spread his own special brand of war across the world.

Check out the first trailer of Machete Kills and tell us your thoughts. Will you be heading out to see this one?