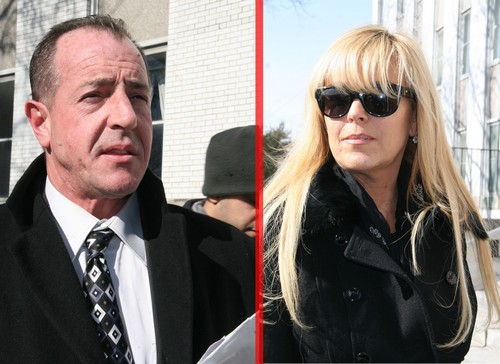 I wish that the entire Lohan family would collectively decide to give up fame-whoring once and for all, don’t you?  Yeah, well it’s not going to happen any time soon, that’s for sure! Both Dina Lohan and Michael Lohan agreed to do a segment on a show called The Test, which uses DNA and Lie Detector tests to try and get to the bottom of family crap and resolve long running conflict.

How long do you think it took before the two of them got completely heated? No very according to TMZ. While they were there to try and resolve discrepancies in their past only Michael was willing to take a polygraph test and that’s when the finger pointing began. Of course they also blamed each other for the downward spiral of a life that their daughter Lindsay Lohan has been living for years now. No doubt Dina blamed Michael for the druggie influence and he insisted Dina made Lindsay into a fame whore.  One thing is for certain, good parenting was never this couples strong point!

Ironically, Michael and Dina met up for a burger on Wednesday, mugging for the cameras and insisting that they really do get along now. That peaceful relationship only lasted about 24 hours. Ironically this weekend there is family therapy at the Betty Ford Center for Lindsay AND her parents. They are supposed to be there to help their daughter top work through family issues. It looks like that won’t be happening now either! Who do you think is really the worst influence on Lindsay? I’m leaning towards Dina. Her interviews make me a little sick. Tell us your thoughts in the comments below!