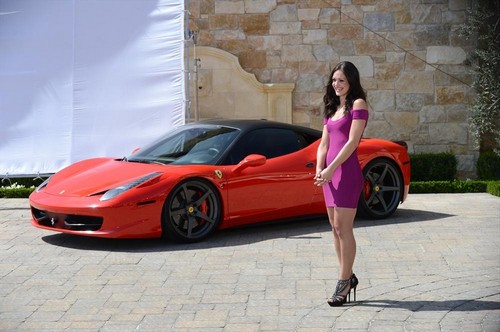 Last week The Bachelorette 2013 aired with its premiere episode.  This season Desiree Hartsock is this season Bachelorette and she is getting to call the shots as she gets a second chance to find love.  On last week’s episode Desiree began her Cinderella journey when Chris Harrison welcomed her to her new home, a cliffside Malibu estate, and gave her the keys to a brand new Bentley convertible. Her transformation was complete as she slipped into a stunning silvery confection of a gown fit for a princess. At the mansion, Desiree’s anxiety fell away as her 25 eager suitors caught their first glimpse of her.  Did you watch last week’s episode?  We did and we recapped it here for you!

On this week’s show a bridal shop provides the unlikely backdrop for Desiree’s first one-on-one date with the tall, dark and handsome Brooks; rap superstar Soulja Boy carefully crafts an aptly named rap music video – “Right Reasons” – using Desiree and a group of slick bachelors; and Bryden is treated to a scenic, romantic road trip up the beautiful California coast. But some of the men are already fighting for Desiree’s love and nearly come to blows. After careful deliberation, three men are sent packing.

Brooks is ecstatic when he gets the first date of the season, complete with Desiree driving them through the streets of Los Angeles in her baby blue Bentley. Making their first stop at a bridal shop, Desiree tries on lavish wedding gowns while Brooks looks dapper in a number of tuxedos. That is just the beginning of the whimsical date, as the Bachelorette decides that they should remain dressed like the top of a wedding cake throughout the date. After a quick stop at a cupcake truck, it’s up to an exclusive seat high atop the world-famous Hollywood sign, which is celebrating its 90th year. For first time ever, a platform is built on the letter “L” for the couple to share their time together there. Over a romantic dinner, Brooks gets emotional as he shares unpleasant details of his parents’ divorce. But the evening ends on a hot note when the couple share a first kiss as they slow dance at a private concert by singer-songwriter Andy Grammer. Will passion be enough to get Brooks a rose?

The next day 14 men join Desiree at a swank Malibu mansion to star in a rap music video appropriately titled “Right Reasons” with superstar rapper Soulja Boy. He carefully selects his rapping protŽgŽs to each play the part of an infamous man from past seasons. There’s Wes from Jillian Harris’ season, Justin and Kasey from Ali’s season, and one bachelor even reprises Jason Mesnick’s legendary tearful collapse. Desiree gets into the act, rapping about her journey to find the perfect man. However at the after party the competition heats up, with Ben interrupting Mikey’s alone time with the Bachelorette, sparking the first confrontation of the season. Meanwhile, Brandon opens up about his tragic broken childhood. Will displaying his deep vulnerability earn him the group date rose or will it be a turn-off?

Bryden nets the last individual date this week and a scenic road trip up the California coast that takes them to their final destination, the posh Ojai Valley Inn and Spa. At an intimate dinner, Desiree’s date relates a story about an accident that changed his life forever. The evening ends in a steamy hot tub with some passionate kisses, but will Desiree need more than this macho man has to offer?

At a tense, pressure-packed cocktail party, the men battle each other for time with Desiree before she makes her decisions, and two come close to duking it out. Meanwhile, another bachelor tries to reassure Desiree that he’s ready to spend the rest of his life with her even though he had some problems with his last relationship.

At the end of the night after a dramatic rose ceremony, 16 men will be left to vie for Desiree’s heart.

Don’t forget to come back Monday for our recap of the episode to find out which 16 men will be left!