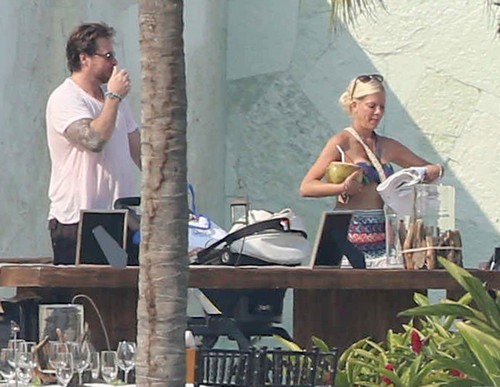 It was rumored a few months ago that Tori Spelling and Dean McDermott were going through a rough patch but by the looks of things they’re doing pretty well now.  Tori celebrated her 40th birthday a few weeks ago and Dean decided to surprise her with a family trip to Punta Mita, Mexico.  The kids had a blast playing in the sand and at the pool in their resort.

According to the June 10th print edition of Life & Style Dean treated his wife to a few massages and a special birthday dinner on the beach. It was probably a great surprise especially after having such a bad year. Late last summer Tori delivered their 4th child, Finn and had serious issues with recovery. Two weeks after delivering Tori was back in the hospital undergoing serious emergency surgery and even 9 months later she still isn’t 100% recovered.

The couple was also rocked earlier this year by rumors of Dean’s cheating and divorce being inevitable. Supposedly Tori can’t trust him and also can’t deal with the reality of her marriage. Instead of confronting him on his wandering eye she pretends that all is fabulous between them.

Do you think that life really is good in the McDermott household?  Or do you think that this is just another of those couples that manages to keep their secrets under lock and key? Ironically the paparrazi always seem to know where Tori will be and it’s likely no coincidence that a perfect shot of the couple kissing on the beach in Mexico has appeared. Do you think that she feeds the media and tips them off to help make her family appear to be on solid ground? Are all of these photo ops a weird coincidence?  Tell us your thoughts in the comments below!