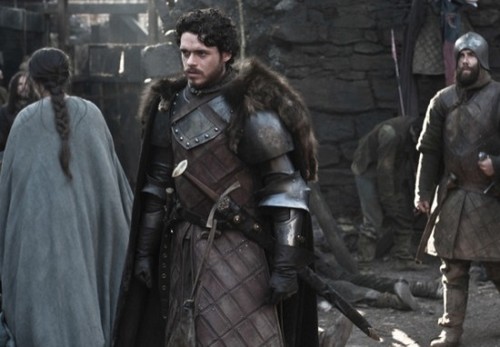 Game of Thrones is rushing towards the finale of season 3, only one more episode left after this week and it is gearing up to be a fantastic season closer.  Tonight our favorite show continues with a new episode called, “The Rains of Castamere.”  On the show prior to the break King’s Landing hosted a wedding for Tyrion and Sansa.   Tywin Lannister reminded his son, Tyrion that it was his job to put a baby in Sansa.  Tyrion and Sansa spent the night together after their wedding, Tyrion decided not to sleep with Sansa until she wanted him too.

Daenerys met the Titan’s Bastard and the Second Sons captains and the titan threatened Daenerys.  The Second Sons plotted to kill Daenerys but one of the members Daario decided he did want to kill her and killed the other captains instead.  Did you watch the last episode before the break?  We did and we recapped it here for you.