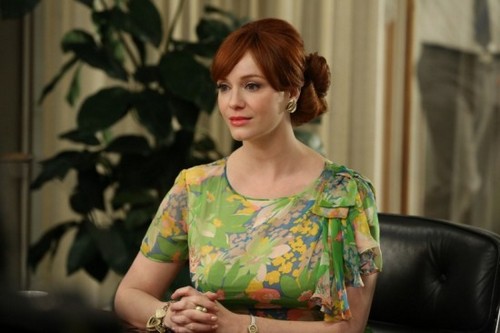 Tonight on AMC our favorite advertising men as Mad Men continues with a new episode called, “A Tale Of Two Cities.”  On last week’s show Harry bragged to Pete that he was going to become a partner when things calmed down. Henry was not impressed when Stu hit on Betty, but it made him frisky and he later made out with Betty in the limo.

Margaret dropped off Roger’s grandson to the office, he took him to the zoo. Abe got stabbed which was the last straw in Peggy wanting to move out.  Abe then got stabbed a second time but this time it was Peggy who accidentally did the stabbing when she heard a noise and grabbed a knife, only to turn around when Abe startled her and stab him.  Did you watch last week’s episode?  We did and we recapped it here for you.

On tonight’s show Joan sees Peggy and tells her that she needs a drink. Pete says he doesn’t understand what the problem is, did someone find out that he went to a head hunter? Ted reveals that somebody’s feelings are hurt because they didn’t “kiss his ring”. Megan calls Don cynical, obviously the two are still at odds. Joan tells Peggy about her new man, but won’t reveal who he is. It will be interesting tonight to see Ted’s real reaction to Peggy breaking up with Abe. Rumour has it that there is a murder looming on Mad Men and it could be Megan.