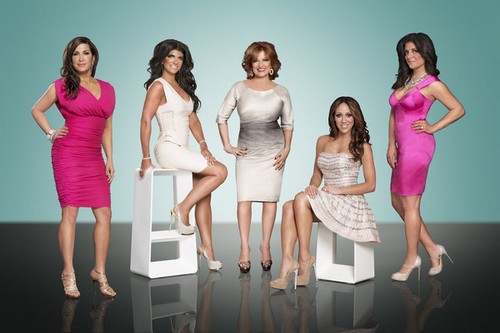 Tonight on Bravo The Real Housewives of New Jersey returns with the premiere of it’s fifth season called, “Garden State of Emergency.”  Did you watch last season’s reunion shows?  We did and you get get caught up because we recapped them here for you – PART 1 – PART 2 – PART 3.

On tonight’s show following an explosive reunion, the ‘Wives get slammed by Hurricane Sandy, leaving their vacation homes as destroyed as their relationships. More than a year of silence widens the cracks between Teresa, Melissa, and Joe. Jacqueline faces her son’s autism diagnosis, as Kathy learns the “art of war” from her sister, Rosie.

Caroline has changed her address, but can’t move far enough from the Giudice and Gorga drama. Her shocking offer to Joe Gorga could lead the ‘Wives toward reconciliation or an all-out war.

Tonight’s episode is going to be filled with more Housewife drama that you won’t want to miss, so be sure to tune in for our live coverage of the show tonight at 8 PM EST!