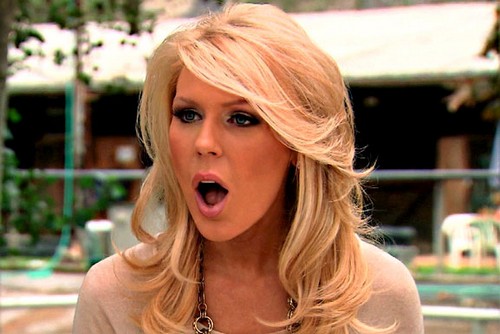 Tonight on Bravo the Real Housewives of Orange Country returns with a new drama filled episode called, “Viva Mexico.”  On last week’s show Vicki was torn between spending the evening with her on-again-off-again beau Brooks and babysitting her grandson Troy.

Meanwhile, Lydia convinced Alexis to finally meet with Tamra for the first time since their epic fight. Gretchen visited a fertility doctor, and Lydia tried to accept that her mother won’t stop smoking marijuana. Then, Tamra gave a powerful speech at the Los Angeles Women’s Expo where she revealed shocking details of her past that she had kept secret for years.  Did you watch last week’s episode? We did and we recapped it here for you HERE!

On tonight’s show Tamra and Alexis face each other for the first time since the debacle at Tamra’s party. Meanwhile, Heather and Gretchen butt heads while planning Tamra’s bachelorette party trip to Mexico. Then, just as the ladies head south of the border, O.C. housewife Lauri Peterson tells Gretchen shocking allegations about Vicki’s past. Will Gretchen bite her tongue or turn this fiesta into a fight?