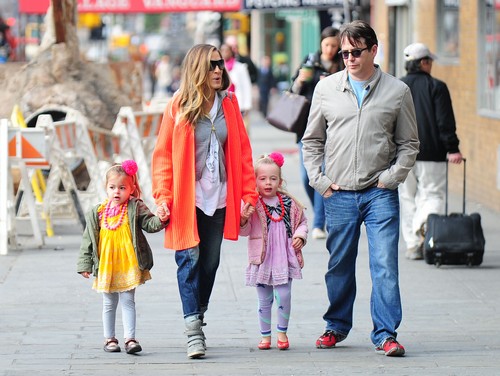 Sarah Jessica Parker and Matthew Broderick have been together for twenty years, which in Hollywood is damn near impossible. Their relationship was rumored to have hit the skids hard back in 2008 when Matthew supposedly cheated with a younger woman. Then there are all of those gay rumors that have followed the actor for years. In spite of the rough patch, the couple not only stuck it out, but also added twins to the mix 3 years ago.

There has been a good luck charm of sorts that has helped to really bind this family together and his name is John Wesley. He dated Matthew’s mother for six years before her death in 2003 and has become a bonafide family member over the last few years. John and Matthew weren’t close while he dated his mother, but they bonded while grieving and John has taught Matthew a lot about what is most important.

John is grandpa to the couple’s three kids and according to the June 10th print edition of National Enquirer, he has singlehandedly pushed the couple back together.  John has no family of his own so he is thrilled to have found a place with Matthew and SJP and they valued what his artists’ vision has taught them about life.

Do you believe that Matthew and SJP have a real marriage or have you thought that there was truth to the notion that she is his beard? Supposedly Matthew has fallen back in love with his wife. They’ve made it twenty years, will they be together in twenty more? Tell us your thoughts in the comments below!