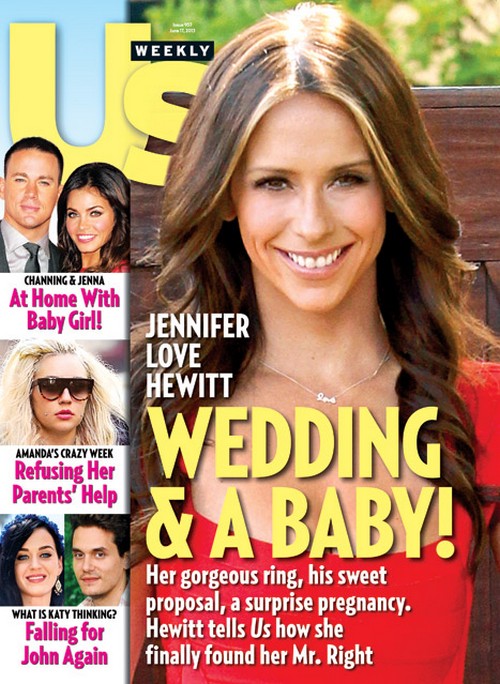 Party of Three!  Congratulations are in order to Jennifer Love Hewitt who is pregnant and expecting her first child with her Client List co-star Brian Hallisay!

Sources say Hewitt is about three months along. “This is a wonderful time and we are looking forward to starting our family together”, the couple, both 34, said in a statement.

Hewitt and Hallisay who play estranged married couple Riley and Kyle Parks on Lifetime’s The Client List, have been dating 15 months since reconnecting on their cable hit.  The two previously appeared on NBC’s short lived show Love Bites together.  Hallisay’s previous credits include the CW’s Priviledge.

Sources say the two have been co-habitating in Hewitt’s condo for awhile now and Hewitt reportedly recently purchased a $3.25 million love nest for her new family.

The baby is amazing news for Client List fans who have been following the story of Riley, a massage therapist who has to result in desperate measures to support her family when her husband (Hallisay) leaves.  In Season 2 of the hit, Riley has been struggling with the return of her former drug addict husband complete with jail and an offer of $500K to sleep with a client.

Hewitt was previously engaged to Scottish actor Ross McCall, who she dated from 2005-2008 and then she began dating her then Ghost Whisperer co-star and funnyman Jamie Kennedy until 2010.

The sexy actress hasn’t kept it a secret she was looking forward to motherhood someday telling US Weekly in 2010 “I would love to have babies…one day! I’m obsessed with babies!”

The exciting announcement also comes in the wake of hearing Hewitt is still one of several names being tossed around along with Hilary Duff, Faith Hill and Kelly Rowland to replace Britney Spears’ judging seat on X Factor.

No word yet on what the baby news will mean for Season 3 of The Client List and Riley’s barely there wardrobe, but we can’t wait to find out!