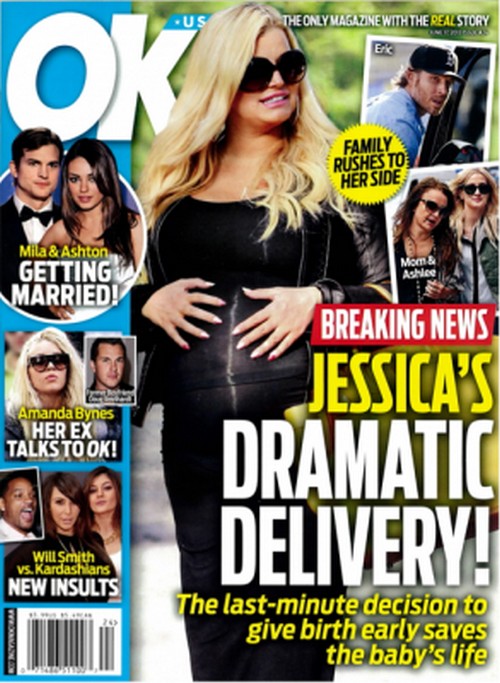 OK! magazine features heavily pregnant fashion mogul Jessica Simpson on the cover of their latest issue. The tabloid is making the claims that they have breaking news regarding Jessica’s second pregnancy.

The magazine reports that Jessica is set to deliver her second child with Eric Johnson earlier than previously planned. Reportedly, Jessica was set to give birth via C-section to their son in August, but something came up, causing her to want to push the date forward.We have yet to hear any official confirmation of the magazine’s claims, so stay tuned for that. Let’s hope that there isn’t anything overly dramatic about their son’s birth and that mother and baby will be just fine.

In this case, we are definitely hoping that this is just a made up story to sell tabloids. What do you think? Are you waiting for the official word from her people on this one?

It sounds like they put a lot of fluff on the cover in order to get readers to buy the magazine. Let’s hope that Jessica and Eric’s son isn’t in any distress and that she really didn’t have to move up the date of her C-section. Hit the comments and let us know your thoughts!