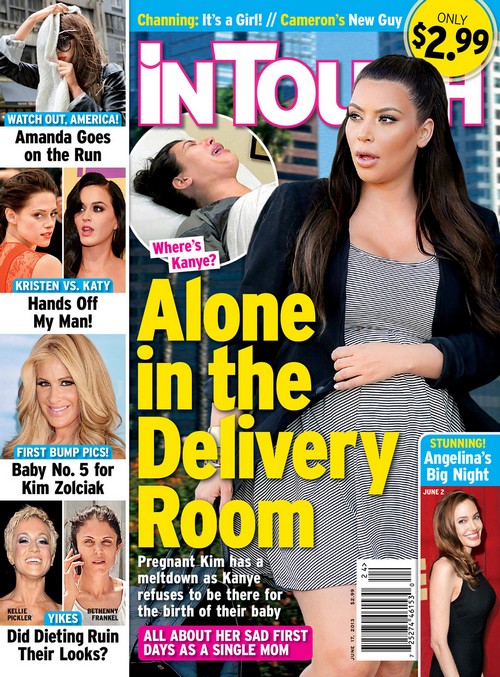 Kim Kardashian and a whiny inset photo of her appear on the cover of the latest issue of In Touch Weekly. The tabloid reports that her boyfriend, rapper Kanye West doesn’t want to be anywhere near the delivery room when she gives birth. Who knew he was such a douchebucket? [Spoiler alert: we did.]

Despite how much we know about how Kimmy loves to whine, cry and complain if she doesn’t get her way, Kanye should definitely be there. This is his first child — and hers – and he should offer all of his support to her while she’s in labor. Perhaps she’ll be too posh to push and will have a C-section?

It’s hard to say about anything at this point, but a source close to the situation said that Kanye is going to be at the hospital…but he won’t be in the room with her when she gives birth. The source said it’s because Kanye is super squeamish about blood and doesn’t want to be around it at all.

She’s a self-entitled twatwaffle, but she shouldn’t have to give birth to his baby without his support. Don’t you agree? Sound off in the comments section below!