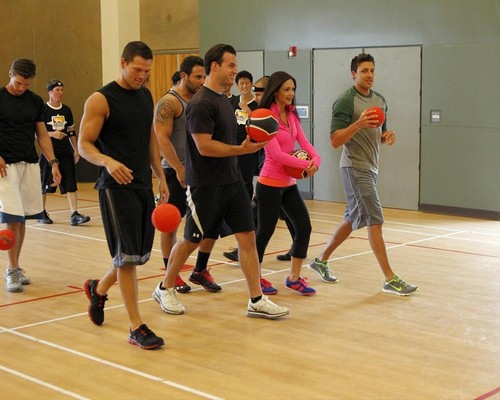 The race for Desiree Hartsock‘s heart is underway on the Bachelor and 16 Bachelor’s remain vying to win her heart.    On this week’s show in one of the most explosive showdowns in Bachelorette history, Desiree confronts one man who is not there for the “Right Reasons.”  We will also be treated to a VIP Private Concert by Kate Earl.

Desiree ups the ante on a winner-takes-all game of dodgeball with a group of the men, but things turn ugly quickly when a massive pileup ends with someone making a trip to the ER. Kate Earl serenades the Bachelorette and one the men with some touching love songs in a special performance. A death-defying individual date with Kasey goes awry, morphing from a fantasy into a nightmare. Roping and riding take center stage as the stunt coordinator for Disney’s “The Lone Ranger” shows some of the guys the ins and outs of being a cowboy. However, it is Chris Harrison’s surprise call to Desiree that starts a wild chain reaction: It’s revealed that one deceptive man not only has ulterior motives for being there, but has a girl friend to boot! Desiree’s firestorm of emotion makes her question all the remaining men. Is her Cinderella story about to crash and burn?

Desiree pulls out all the stops and brings in the pros from the National Dodgeball League to teach the guys how to take their game to the next level. After a spirited practice session, the blue team of bachelors takes on the red team at the Americana in Los Angeles. The clash of titans ends up in an enormous heap, sending one person to the ER with a broken bone. How will this affect that night’s after-party? Chris sweeps Desiree off her feet and sparks begin to fly. The two escape for a private concert under the stars by soul/pop/gospel singer Kate Earl.

Desiree is blown away when Chris Harrison informs her that one of the men is definitely not there for “the right reasons” and that, in fact, he left a girlfriend back at home to participate on the series. A total shocker follows when the guy’s girlfriend shows up unannounced. All hell breaks loose and a very visceral confrontation ensues. Can Desiree trust any of the other bachelors? How will she decide who is sincere?

Then it’s time for a one-on-one date with Kasey who is determined to show the Bachelorette what love should be about. Their time together begins with the unusual dance troupe, “Bandaloop.” These artists dance on the side of skyscrapers using a special trapeze rigging. They teach Desiree and Kasey tricks they’ll need in preparation for their guest star appearance. But it is not as easy as it seems and things quickly go south, making it one of the most calamitous dates in “Bachelorette” history. A sudden windstorm later ruins what is supposed to be a romantic rooftop dinner. Will Kasey recover to get a rose?

Five lucky, rugged guys are schooled in the fine art of cowboy stunts and tricks by the stunt coordinator on Disney’s eagerly awaited upcoming release, “The Lone Ranger,” starring Johnny Depp and Armie Hammer. They’ll be competing for a chance to win a seat next to Desiree in an advanced VIP screening of the movie, in theaters on July 3. One hero-in-training steals Desiree’s heart with his fancy roping and stuntman skills. Who will be the Bachelorette’s “Lone Ranger?” But a group date rose is still at stake at the after-party, and one of the men will impress Desiree enough to lasso it.

Desiree throws a curve at her guys and decides that the cocktail party is cancelled, so it becomes a pool party instead. Tempers flare and there’s a confrontation between the men when one overzealous suitor is caught stealing time with the Bachelorette. The two guys leading the charge would like the sneaky bachelor out of the mansion and far away from Desiree.

At the dramatic rose ceremony, Desiree shows up in a glamorous gown she designed herself – a “Bachelorette” first! She struggles with whom to send home, and one unlucky guy is completely devastated when he doesn’t receive a rose and breaks down. At the end of the night, 13 men will be left in the race to make Desiree theirs.

Don’t forget to come back Monday for our recap of the episode to find out which 16 men will be left!