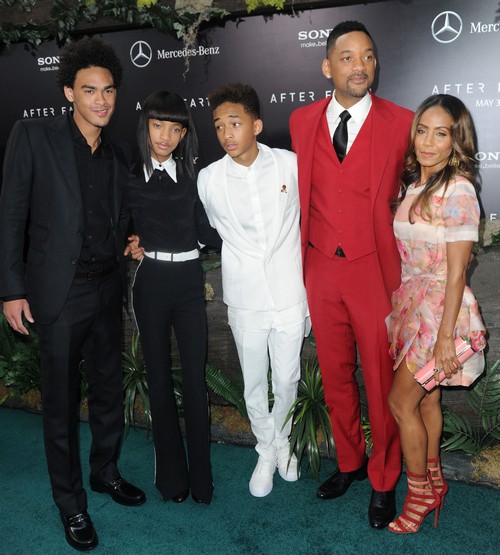 Will Smith has been in the spotlight for about 25 years now and he and wife, Jada Pinkett Smith have pretty successfully raised kids under that Hollywood microscope. When sitting for a joint interview with his son, Jaden Smith last week, Will dished on what is most important for his family. According to the June 17th print edition of In Touch, Will claims that fame just so happens to be a by-product of the work that they do. He claims that their main goal is to choose projects that allow them to bring some cool stuff to the fans and to have fun while doing it.

I guess Will hasn’t actually seen his current dud with Jaden, After Earth, because it’s hardly good stuff. The topic was raised though because Jaden is currently dating Kylie Jenner, a teen who also comes from a famous family. Will made it pretty clear that he wants nothing to do with being famous or relevant for doing nothing. In fact he has little respect for those that purposely fame seek without any real talent.

This leads me to believe that Will probably isn’t too happy with Jaden dating Kylie.  Supposedly neither is Kris Jenner. Once she realized that there was no way in hell that Jaden was going to make a cameo on their reality show she had little use for him. Plus Kylie has expressed an interest in Scientology and Kris is completely against Kylie becoming involved with a cult that would demand a nice chunk of Kylie’s money. After all, that’s Kris’ job, right?

Do you think that the Smith’s are different from the Kardashian clan? Tell us your thoughts in the comments below!