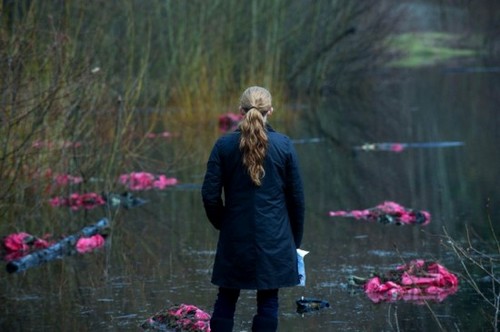 Are you ready for another new episode of The Killing?  Tonight, after last week’s double episode premiere is another new episode called, “Seventeen.”  On last week’s show the third season has an amazing opening and start with Linden no longer being a detective as she needed some time away after Rosie’s murder and finally finding out who killed her; Darren Richmond’s aide Jamie Wright.

A teenage prostitute was murdered and Holder thinks it could be the work of a serial killer in Linden’s past, a creepy killer named Ray Seward who is on death row.  Did you watch last week’s premiere double episode?  We did and we recapped it here for you.

On tonight’s show as we see in the promo trailer below, there’s a survey shot of the floating bodies Linden found and that scene, folks, is slightly unappetizing. So, if you thought spoilers make you sick to your stomach, then I suggest you stay away (Oh, who am I kidding, y’all are tough cookies. Watch away!). Anyway, the bodies lead the team to believe that they’re dealing with a serial killer situation and, form the looks of things, I’d say they’re correct. But, I am expecting a twist of some sort. How about you?