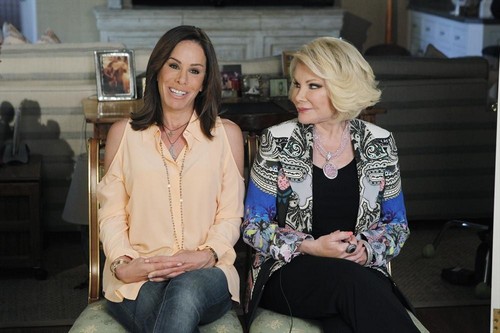 Celebrity Wife Swap first family, Bristol and Willow Palin reside in Wasilla, Alaska with Bristol’s four-year-old son, Tripp, who rules the roost. What Tripp says goes in the Palin household. When Melissa Rivers arrives in Wasilla, she’s surprised to see snow on the ground – in May! Meeting Willow and Tripp, Melissa finds it a challenge to deal with Tripp’s boyish exuberance, and feels that he needs to have a set daily routine. Aunt Willow is no help when it comes to discipline, and in fact is often the instigator behind Bristol’s back. But Melissa is determined to bring structure to the Palin home, so when it’s time for the rules change, she immediately initiates a new sticker chart reward system for Tripp. She also applies rules changes to Willow, helping Willow to get one step closer to following her passion in a career.

Celebrity Wife Swap second family, Joan and Melissa Rivers, one of television’s most popular mother-daughter duos, live together with Melissa’s 12-year-old son, Cooper, in her Los Angeles, California home, which doubles as a television production office and the set of three TV shows produced there. Every day in the house is scheduled to the minute. While the Rivers’ home is bustling with assistants, crew members and cameras, the family still find time to sit down together for dinner every night. Stepping into Melissa’s shoes, Bristol Palin is not prepared for the Rivers’ formality and schedule, and is reluctant to fill in as executive producer of “Fashion Police.” When Joan throws a formal dinner party to welcome Bristol, it doesn’t go as Bristol had expected, leading her to appreciate her life back in Alaska even more. But Bristol is determined to bring some more fun into the Rivers’ lives before the week is over.

This is certain to be on of the funniest Celebrity Wife Swaps yet.  Bristol Palin does not stand a chance against Joan Rivers.   I will be tuning in for sure to catch this episode.  “Bristol & Willow Palin / Joan & Melissa Rivers” episode airs JUNE 23 (8:00-9:00 p.m., ET) and you don’t want to miss the episode!