Kanye West Cheating On Kim Kardashian While She Is Pregnant 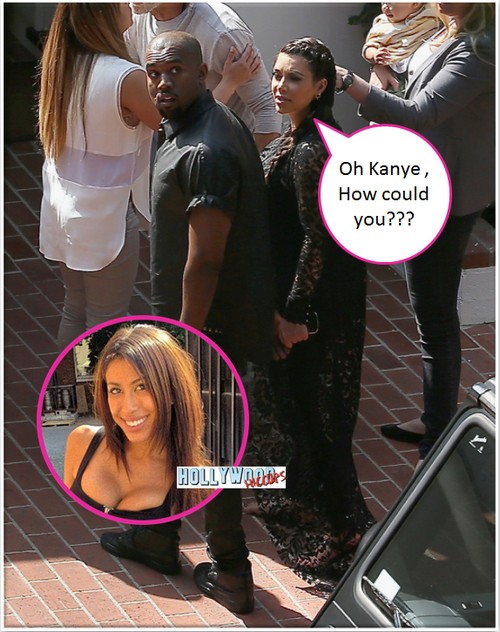 So now we know why Kanye West does not want to be near his, “perfect bitch!”  It seems Kanye has been cheating on Kim Kardashian before and during her pregnancy.  The lady in question is Canadian model 24-year-old, Leyla Ghobadi.

Leyla  has been blabbing all the details to Star Magazine and she claims Kanye is only with Kim to build his fan base.  Leyla does not want to look like the bad girl of course so she claims she has given this interview and spilled the beans our of the goodness of her heart for Kim.  “This is going to destroy the Kardashian family.  It’s bad. It’s really bad. It’s just embarrassing. But if I were Kim and about to have a baby, I would want to know.”   She may think she is fooling us but we all know she gave the interview for $$$$$.

Leyla claims her romance with Yeezy started in July 2012 when he spotted her dancing while he was performing and had one of his crew contact her to come backstage.  “He invited me back to his hotel room, but I refused, as I felt it was too rushed.”

Allegedly, Kanye continued to purse Leyla but she was holding back because she knew about him being with Kim.   “He told me that [the relationship] was for publicity and nothing serious.”

Kanye finally wore her down and the two started a torrid fling.  However, once Leyla realized Kim was pregnant the, “paragon of virtue” put the brakes on the relationship and said, “NO WAY!!!”

No comment yet from Kanye’s reps.  What do you think Hiccupers?  Is Kanye a dirty dog or is Layla just trying to get her, “15 minutes of fame?”  Hit the comments and let us know your thoughts!

To check out what Kanye had to say about the allegations, go to our sister site Celeb Dirty Laundry, CLICK HERE …

To check out an interview that Kanye gave to the New York Times where he talks about His Greatness, His Woman & His Baby, CLICK HERE …