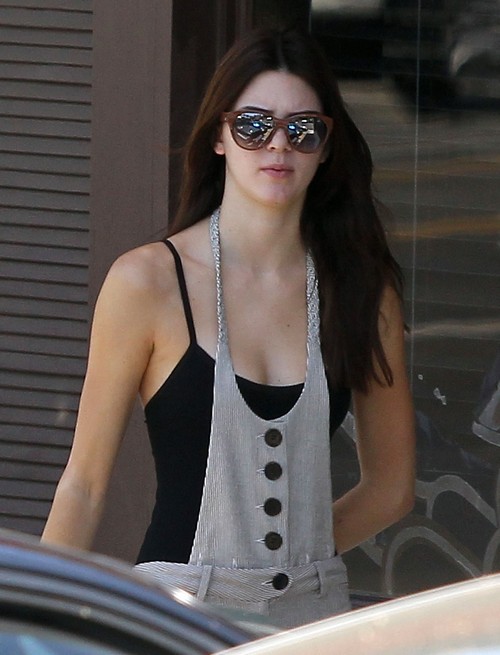 For some weird reason, the New York Times profiled Kendall Jenner. I’m not sure why they did, but I’m guessing Kris Jenner had to pull some strings to get it done. Well, the joke’s on her since the report is wildly unflattering on Kendall’s management, and shows how much the poor girl wants to break away from her fame hungry family.

I mean, take a look at this exchange that was documented by the NYT journalist before the interview actually took place.

Sitting in a small suite at a Midtown hotel, the 17-year-old was fidgeting her way through interview after photograph after interview, helped along by a roomful of zealous publicists and handlers. “I think you always talk about how appreciative you are,” one of her publicists said. “Yeah, how appreciative I am,” Ms. Jenner said, plucking at her tights. “And that you enjoy the life you have,” the publicist said. “I enjoy the life I have,” Ms. Jenner said, zipping and unzipping a sofa cushion.

The rest of the report is as awkward and awful to read as the first part. Towards the end of the interview, Kendall’s asked about rumors of her parents’ divorce. In what was assumed to be an unscripted answer, Kendall quickly squashes the rumors and says, “It’s just stupid; that’s not true. I don’t feel anything about it. It doesn’t hurt me. It’s not something that gets to me. I know the truth. I live with myparents, and I know what’s going on —–” And then her publicist cuts her off. Obviously, we can’t have Kendall disputing those rumors, since it will then affect tabloid sales. See how calculated they are?

It’s pretty clear that Kendall is miserable with what she’s being asked to do, but she has no idea how to say no. Her whole life has been micro-managed to the smallest detail and because she’s the best looking girl of the Kardashian family, Kris Jenner is slowly grooming her to take over Kim’s position as the face of the Kardashian family. Kendall’s even said previously that she doesn’t want to be a part of the show, and both she and her little sister [Kylie Jenner] want to live ‘normal’ lives. Unfortunately for her, I don’t see that happening until she and Kylie learn to stand up for themselves. I only hope she gets the courage to do so before she’s fully brainwashed and groomed to become Kim 2.0.