Why Jennifer Aniston and Justin Theroux’s Wedding Is On Hold 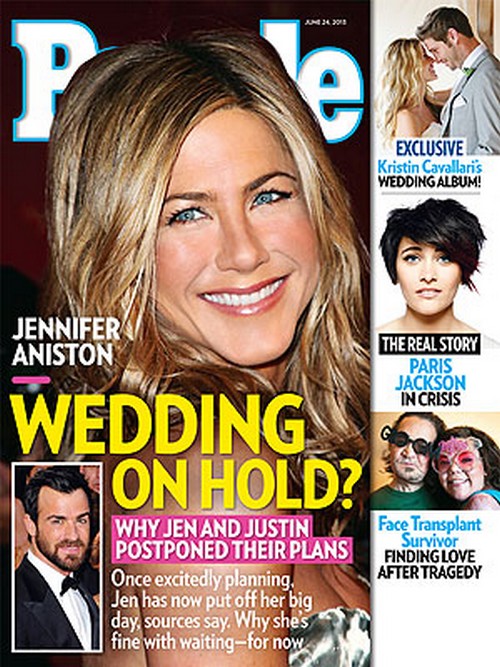 The current issue of PEOPLE MAGAZINE features the cover story, “Jennifer Aniston – Wedding On Hold?”  The magazine claims to have all the dirt on why Jennifer Aniston and her fiance Justin Theroux have postponed their wedding plans.  Jennifer, who since being kicked to the curb by Brad Pitt just never can seem to keep her man.  Jennifer has been engaged to Justin Theroux a whopping ten months and no marriage yet.

The excuse coming from the Aniston/Theroux camp is that the two are too busy now with commitments and house renovations so, “wedding talk has stopped.”
People reports, “The much-anticipated nuptials have slowed down. A few months ago, arrangements were in full swing, says a source who speaks to Aniston often. “Wedding bands were designed and Jen was deciding on a dress,” says the source. The actress had a date in mind, too – this spring.”

So we are suppose to buy that they are still madly in love and Jennifer is dying to marry Justin?  But we are also suppose to believe that the couple desperate to marry have to find the right time.  Work, renovations, washing Jen’s hair all comes first…… ya sounds like true love to me, how about you?

If you want more details on why Jennifer and Justin’s marriage is on hold, pick up the current issue of People Magazine, on stands Friday!