Will Smith Kisses Jaden Smith On The Mouth On Thai TV – Weird And Gross, Or Acceptable? (VIDEO) 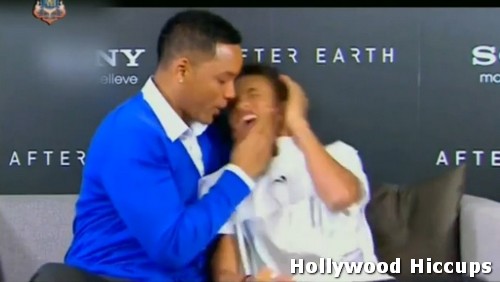 Because ‘After Earth’ bombed so epically in the US, Will Smith and Jaden Smith are doing their best to promote the film internationally so it can at least recoup its losses for Sony. With that in mind, I don’t know if this following report is a promotional stunt, or the Smith family is just weird like that.

While promoting ‘After Earth’ in Thailand, Will was asked to do something he never did before on television. He promptly leans over and kisses Jaden on the mouth, even though Jaden squirms away in embarrassment. The interviewer screams happily and shouts ‘frenchie’, which is made even more disturbing considering that Will just kissed his teenage son on the mouth.

Is this some weird Scientology thing that we don’t know about? Well, even if that was the case, why would Jaden look so embarrassed and humiliated after the kiss? And seriously, when the interviewer asks you to do something you’ve never done before, why is the first thing that pops into your mind to KISS YOUR SON ON THE LIPS?! I get that Will and Jaden are close, as they keep harping on about, but this is crossing boundaries.

Do you guys agree? Was this acceptable and I’m just overreacting, or was it gross and unnecessary and creepy all at the same time? Let us know in the comments.

Video Link [happens around the 4:45 mark]