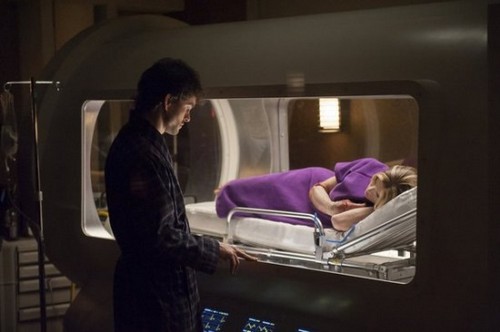 Hannibal continues on NBC tonight with a new episode called, “Relevés.” On last week’s show the BAU investigated a murder in which two victims’ faces were similarly mutilated; given a “Glasgow Smile.” For the first time, Will contaminated a crime scene thinking he committed the first murder and an MRI shows he suffered from Advanced Encephalitis.

But Hannibal intimidated the attending physician, Dr. Sutcliffe, into telling Will he’s okay. Meanwhile, the team doubted Will who said, while revisiting the crime scene alone, he saw a mysterious, “dead-looking” woman who might have been involved. With his fears fed by Hannibal, Will returned to Dr. Sutcliffe for more mental health tests, when the doctor was murdered.  Did you watch last week’s show? We did and we recapped it here for you!

After Georgia Madchen (Ellen Muth) dies in an explosion, Will (Hugh Dancy) asserts that the copy cat killer is still alive. The BAU team links Abigail (Kacey Rohl) to the Minnesota Shrike victims and plan to arrest her only to find Will has checked her out of the hospital. Will’s hallucinations intensify, causing him to lose Abigail in Minnesota. Meanwhile, Hannibal’s (Mads Milkkelson) subtle manipulation convinces Jack (Laurence Fishburne) that Will is capable of murder. Hannibal makes an astonishing admission to Abigail. Gillian Anderson, Lara Jean Chorostecki, guest.