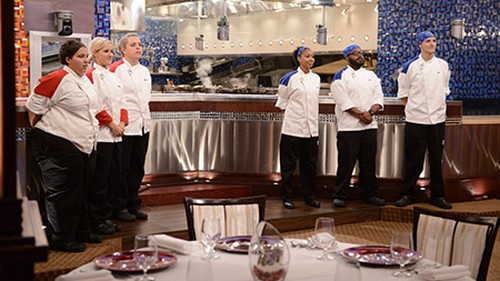 Hell’s Kitchen returns to FOX tonight with a new episode called, “6 Chef’s Compete.” On last week’s show in the continuation of the signature dish challenge, Chef Ramsay determined which chef has made the greatest strides in the competition, and the chef with the best dish earns immunity in the next dinner service. Later, pressure mounted in HELL’S KITCHEN as the chefs had to prepare a stunning meal to impress very special guests dining at Chef’s Tables, TV host Maria Menounos and actor Jeremy Sisto.

Dinner service got off to a strong start, but one team’s service quickly headed downhill, forcing Chef Ramsay to step in at one station. Two members from the losing team went head-to-head in an emotional elimination round.  At the end of the show Anthony was sent home.Did you watch last week’s episode? We did and we recapped it here for you!

On tonight’s show Chef Ramsay tests the remaining six contestants’ ability to communicate and work in sync during a three entrée relay race. Each team will have 30 minutes to prepare three dishes with one chef in the kitchen at a time. The winning team enjoys a helicopter tour and an exquisite caviar tasting, while the losing team is punished with backbreaking work peeling potatoes in HELL’S KITCHEN. Later, both teams please Chef Ramsay during dinner service but with coveted black jackets at stake, one more chef must go home for good.