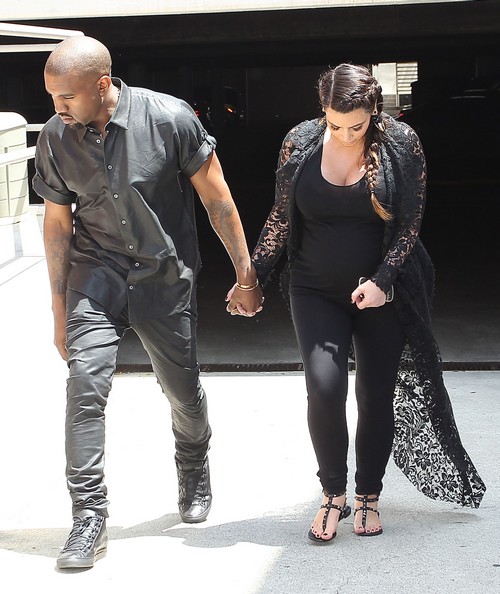 Those who have not read Kanye West’s in-depth interview with the New York Times, it is absolutely crack filled with crazy. The delightful crazy that only Kanye West can provide us. Some of his quotes are simply amazing, and the level of narcissism that he exists at is astonishing. But despite the high level of crazy, you have to give it to the guy – he really is talented, and he really has worked hard to get up to his level. If only he didn’t degrade his brand value by associating with the Kardashians.

Anyway, you can read the full interview here, but the best parts of the interview are the parts where he focuses on his relationship with Kim Kardashian and the baby.

When talking about Kim, Kanye explains, “Any woman that you’re in love with or that loves you is going to command a certain amount of, you know, energy. It’s actually easier to focus, in some ways. Yeah, that’s what I mean when I say like, ‘Yo, I’m going to be super Zenned out like, five years from now.’ I’m the type of rock star that likes to have a girlfriend, you know? I’m the type of soul that likes to be in love and likes to be able to focus. And that inspires me.” What does that even mean? She takes energy, but the energy is good? Something like that? But wait, the quotes about becoming a father are even better.

He adds, “One of the things was just to be protective, that I would do anything to protect my child or my child’s mother. As simple as that. I don’t want to explain too much into what my thoughts on, you know, fatherhood are, because I’ve not fully developed those thoughts yet. I don’t have a kid yet. Yeah. Well, I just don’t want to talk to America about my family. Like, this is my baby. This isn’t America’s baby.”

Oh boy, please say ‘This isn’t America’s baby’ when Kim debuts the baby on national television, please. I’d love to see that argument on television. I mean, it seems kind of hypocritical right? Dating the biggest famewhore in America and then saying that this isn’t America’s baby? Maybe for him, but you can sure as hell bet that Kim will make sure all of America knows everything there is to know about it.

Let us know what you think about Kanye’s genius/crazy/hilarious interview in the comments. He really is so, so entertaining.