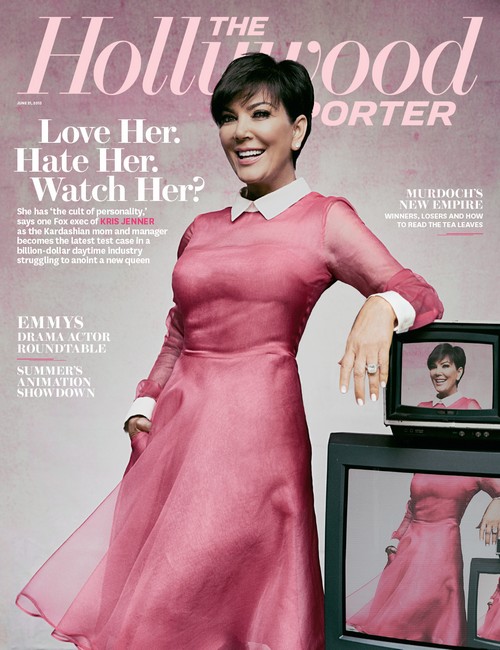 Snippets from the latest issue of the Hollywood Reporter, with Kris Jenner on the cover, have been released online. Obviously this interview was conducted before today’s big bombshell about Kanye West possibly cheating on Kim Kardashian, but it’s revealing nonetheless.

When asked about plans for Kanye’s and Kim’s wedding, Kris reveals that they’ve already thought about it, explaining, “This time it will be private and smaller, if she does get married again — not 500 people.” Will you look at that? Kris is already planning the wedding, before Kanye’s even proposed to Kim.

Kris also addresses rumors of Kim getting plastic surgery during her pregnancy, saying, “[It’s] so stupid. I just wish people would use their head.” And the rumors that Kanye hates Kim’s pregnancy weight gain? “Pure fabrication.” Well, of course she would say that, she can’t exactly say, “Yeah, Kanye hates my pregnant daughter’s weight gain.”

While I’m still confused about the reasons The Hollywood Reporter, one of the most prestigious magazines in the industry, put Kris Jenner on their cover, the interview was definitely eye-opening – or at least, the bits of the interview that we’ve seen. Kris Jenner is never one to pass up an opportunity to famewhore herself and her family, and she does just that in this interview.